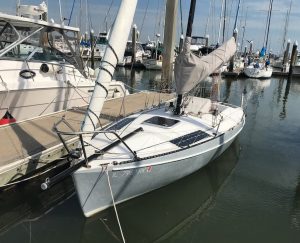 Webb Chiles, 77, is about to sail from Hilton Head Island, South Carolina, for Panama and San Diego, in GANNET, his ultralight Moore 24, to complete his sixth circumnavigation and her first.  Since leaving San Diego in 2014, GANNET’s daily runs total 25,028 miles.

Their intended course to Panama is east of the Bahamas and through the Windward Passage between Cuba and Haiti.

Webb Chiles has never had sponsorship or shore teams.  He goes to sea with no radio beyond a handheld VHF with a range of less than ten miles.  He has contempt for crowd funding of other people’s dreams.  Decades ago he found freedom by choosing to be independently poor.  The key word is ‘independent’.

He and GANNET will depart when he sees a GRIB he likes, but no earlier than Wednesday, January 16.  Once at sea he cuts ties to the land completely and receives no outside weather information.  He studies the sky, the sea, and the barometer, looking for signs of change.

He hopes to reach San Diego in time to be with Carol, his wife, on her birthday in late April.

If you want to follow, GANNET’s Yellowbrick tracking page is:  https://my.yb.tl/gannet

you hide, you lose