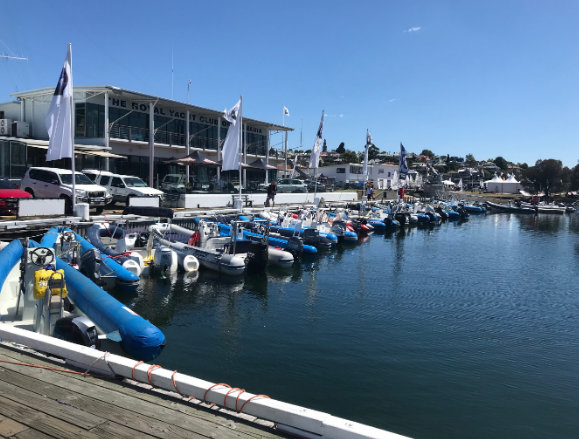 Is this a legit beef or some sour grapes?

So here is picture from the Australian Youth Championships at the Royal Yacht Club of Tasmania which I took on Friday morning. This a premier event of Australian Sailing.

All up about 75 coach boats were moored on this and the other wharf. At say an average of AUD $60 000 each that makes about AUD $4.5 million. I could not see that too many were privately owned. People wearing national body issued clothing were busy running around. Presumably, these people are being paid handsomely for what they do as well. Again I these people are not privately funded.

Later on Friday I went to usual Friday afternoon drinks at the little sailing club up the road from my house. Just 35 miles south of Hobart by sea is the Port Esperance Sailing Club. Port Esperance has a very proud maritime heritage having been a whaling port then a timber port and presently a major crayfish and abalone centre. It is also the home of both Tassal and Huon Aquaculture which are Australia’s two largest salmon growers.

The Sailing Club dutifully pays affiliation fees which make there way up the tree to Sailing Australia or at least to Sailing Tasmania. The club house is a converted apple packing shed that was built in the late 1800s. One major event is held each year which is the Easter Regatta and this year was 160th Regatta. All types of boats are catered for from classics to rowing skiffs to Mumm 36s and usually about 100 boats turn up.

So next weekend, the Sailing Club is holding a learn to sail weekend. Two days for $50.00, boats and lunch provided. There will be a good turnout for the weekend and it will be a community event for a small town even if not everyone who turns out, wants to learn to sail. The first thing you might notice about the Flyer is that there is no mention of Sailing Australia or any so called “pathway”. Just call “Matt”. 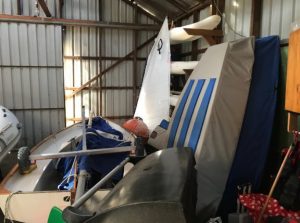 So here are a few pictures of the storage shed at the Sailing Club. A few timber Pacers and two newish Optimists. The Optimists were funded by a “dollars for dollar” grant offered by local government. The old Pacer and Lasers were donated.

The baby RIB was funded by the Salmon companies as part of a community engagement programme. Needless to say, there has never been any Sailing Australia support grant money for the Port Esperance Sailing Club.

I don’t expect anyone up the road in Hobart will be asked to make a gold coin donation to use the shower so a second shower can be built. And no doubt there will be a warning from Sailing Australia that the Sailing Club cannot hold a learn to sail course without some special Sailing Australia mandate which sees more money sent up the tree and never to come back down.

Funnily enough I have a problem with the proposition that we can spend AUD $4.5 million dollars on coach boats for one youth event for generally well-heeled kids when at the same time small club that puts on a community event that brings people into the sport asks for a gold coin to use the shower so they can build a second one.

So my first response last Friday was not anger but disappointment in the leadership of the sport. So to each director of Australian Sailing I say this, You are not Sailing Australia just Sailboat Racing Australia. Sports grow from the ground up not the top down. Do not pretend to represent sailing as clearly you do not and have no interest in doing so.

You are becoming more and more irrelevant to those you purport to serve but you don’t seem to understand this. You cannot call yourself a “peak body” of the sport. So time you change your name to reflect all you really do.

If your excuse is we don’t make the funding guidelines then if you are representative of the sport you should be arguing to change the guidelines. If the argument is that small club infrastructure is a local matter then either you are not representative or Sailing Tasmania Office which you operate is not doing its job.

It is not without great irony that the biggest sailing event in the country with the largest public engagement will happen next month in Hobart and you will have no involvement or presence.
So you can sling Port Esperance Sailing Club AUD$ 80 000 out of your “Reptile Fund” so it can build another shower, maybe even as shower block.

It is just the cost of one coach boat after all.

And maybe make “Matt” the Australian Sailor of the Year next year.