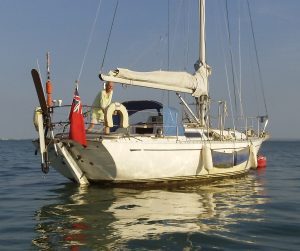 UPDATE: GOOD NEWS!! Just received a call from Robin Davie /s brother that Robin called in by VHF radio to a coast station. He is 25miles SW of the SCILLY Isles. All is well. I am sure Robin will answer all the questions later, but certainly good news for now. Robin had left instructions with his brother that If he had NOT made contact by Tuesday morning something must be wrong. His brother then raised his concerns with UK Falmouth Coast Guard on Wednesday morning and they were managing the situation. The family is very grateful for all they and the French MRCC have done.

Falmouth Coastguard has issued an ‘All Ships Alert’ for British solo yachtsman Robin Davie, now three days overdue on a 300 mile solo cross-Channel voyage from Les Sables d’Olonne, France back to his home port of Falmouth in Cornwall.

The 67-year old experienced sailor, who has successfully completed three solo circumnavigations, set out from the French port at 10:00 on Saturday 5th January, telling his brother Rick Davie to expect him back last Tuesday. Nothing has been heard from him since.

Davie was reported overdue on Wednesday morning and the UK Maritime Coastguard Falmouth have been broadcasting alerts to all shipping in the area since then. No EPIRB signal has been detected.

Weather conditions have been light and variable for the past week. Davie’s yacht, the Rustler 36 C’EST La VIE had recently undergone a complete refit including new mast and rigging, which had been fitted in Les Sables D’Olonne. There is a discussion thread.