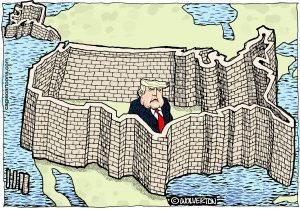 Bow down to your Dear Leader, right wingers. Pretty proud, are ya?

The U.S. Coast Guard’s merchant mariner licensing offices are closed due to the ongoing government shutdown, with serious implications for some deck and engineering officers.

To address the closure, the Coast Guard’s National Maritime Center has granted an extension for Merchant Mariner Credentials (national endorsements only) and Medical Certificates expiring in December 2018 and January 2019. Mariners can sail using documents covered by the extension until March 31.

However, the extension does not apply to STCW endorsements, which are required on STCW-certified ships. The Masters, Mates & Pilots (MMP), which represents a substantial portion of licensed American mariners, is concerned that some of its members may not be able to ship out if their STCW expires during the shutdown.

Since December 22, hundreds of thousands of federal employees have been furloughed or have been compelled to continue working without pay. 42,000 U.S. Coast Guard servicemembers remain on duty, and thanks to a one-time workaround, they received all pay owed for the second half of December. However, their January 15 paycheck will not be paid unless funds are appropriated by Congress and approved by the president.

The same is true for Coast Guard veterans, who will not receive their February retirement payment if the government shutdown continues past the end of this month. Read on.