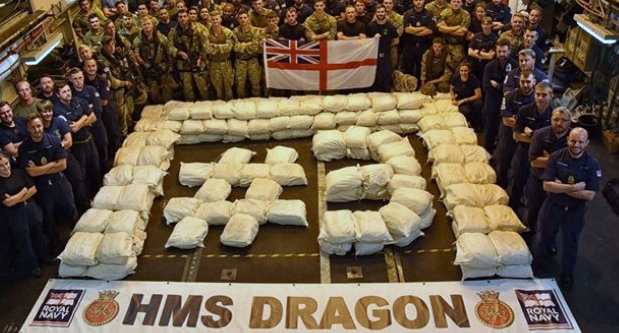 The Royal Navy warship HMS Dragon has seized and destroyed ten tonnes of hash worth nearly $100 million in a record-breaking drug bust in the Persian Gulf.

In a productive 48-hour window, the Type 45 destroyer intercepted two dhows carrying a haul of illicit drugs on the notorious drug smuggling route known as the “Hash Highway.”

It marks the biggest seizure of illegal narcotics ever recorded in the history of the Combined Maritime Forces, the multinational organization in charge of policing this stretch of sea.

These are the third and fourth smuggling-dhow busts for the futuristic $1.3 billion air defense destroyer in the space of a month, taking the total quantity of drugs seized to 13.3 tonnes during the first three months of the ship’s deployment.