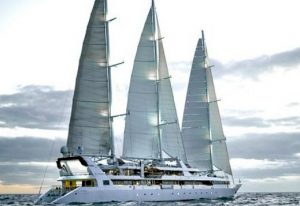 French cruise line Ponant is testing the Solid Sail® concept on its vessel Le Ponant.
Tests are being conducted with maritime construction company Chantiers de l’Atlantique as part of the sailing cruise-vessel project Silenseas, launched two years ago. Two patents have been filed for the new type of sail which is made of fiberglass, carbon and epoxy resin panels in a carbon-slat frame.
Sails of over 300 square meters (3,200 square feet) were installed on Le Ponant in October before the three-masted ship set sail for Cape Verde and then across the Atlantic to Cuba.
The 89-meter (292-foot) vessel is a three-masted yacht that can carry 67 passengers in 32 cabins. The prototype technology will be tested on her for a year. A smaller-scale test has already been conducted on a vessel owned by French yachtsman Jean Le Cam.
Earlier this year, French shipbuilder STX France unveiled a new sailing cruise ship concept as part of the Silenseas project, which is supported by the French Agency for the Environment and Energy Management. The 190-meter (620-foot), 150-cabin concept vessel would feature Solid Sails and hybrid-electric propulsion with the aim of reducing fuel consumption by 25 percent, saving more than 2,500 tons of fuel per year and 7,500 tons of CO2 emissions per year. Thanks to MAREX.