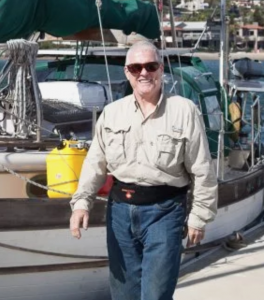 Outside Mag published an incredible story yesterday by Ali Carr Troxell about the disappearance and search for her circumnavigating dad, retired shrink Richard Carr. For its attention to detail and the dee+p dive into the kind of fear and horror faced by the family of a sailor in trouble, we urge every ocean sailor to read it. For Carr, who just days before disappearing wrote to his daughter that he would “Adveture & learn or die trying,” we wish fair winds.  Here’s an excerpt of this great piece.

I’ve spent hours trying to imagine what happened in the end. I’ve pictured Dad in an altered state: eyes glazed over, stoically moving about the boat as he completed necessary tasks, like dealing properly with my grandparents’ ashes. Or maybe he was sobbing—heartbroken to know he would never see his family again. Then he either set the teak deck on fire or cut an intake hose, filling the boat with water and sinking it.
If he did any of these things, it was because sleep deprivation had driven him mad, making him believe that suicide was the only way to escape the pirates he’d conjured, the only way to prevent them from killing him.
He didn’t have a gun on board, as far as we know, so he would have died either by fire or in the sea. Did he stay on deck as flames rose around him? Tim doubts it. He thinks Dad started a blaze, dove off the side, and swam straight down. I picture mottled moonlight reflecting on his pale skin as he descends into darkness.

too much is just right

the last time i cared