We’ve been in awe of Francis Joyon for a long time, but even his incredible record-shattering solo circumnavigation aboard IDEC pales in comparison to his overall victory and course record yesterday in the Route Du Rhum. “But all the way round the world is so much tougher”, you might say – but you’d be wrong.  Because of its relatively short length, the Route Du Rhum is far more competitive than a record attempt, and it puts orders of magnitude more pressure on competitors.  Severely restricted communications with the outside world probably doesn’t bug Joyon much, but at 63 years old in the most physically demanding of any racing class, he just beat the top sailor of his generation and a kid half Joyon’s age – sailing a much quicker boat (and no, the fact that Macif limped home with just half the designed number of rudders and foils doesn’t reduce the impact of Joyon’s accomplishment at all…choosing the equipment is often as important as sailing fast).
We salute Joyon for yet another awesome run, and we’ll leave you with a congratulatory note for Francis from the guy whose Route Du Rhum course record he broke, the inimitable Loick Peyron, writing from his tiny yellow trimaran Happy (See Loick’s sketch of the boat above). 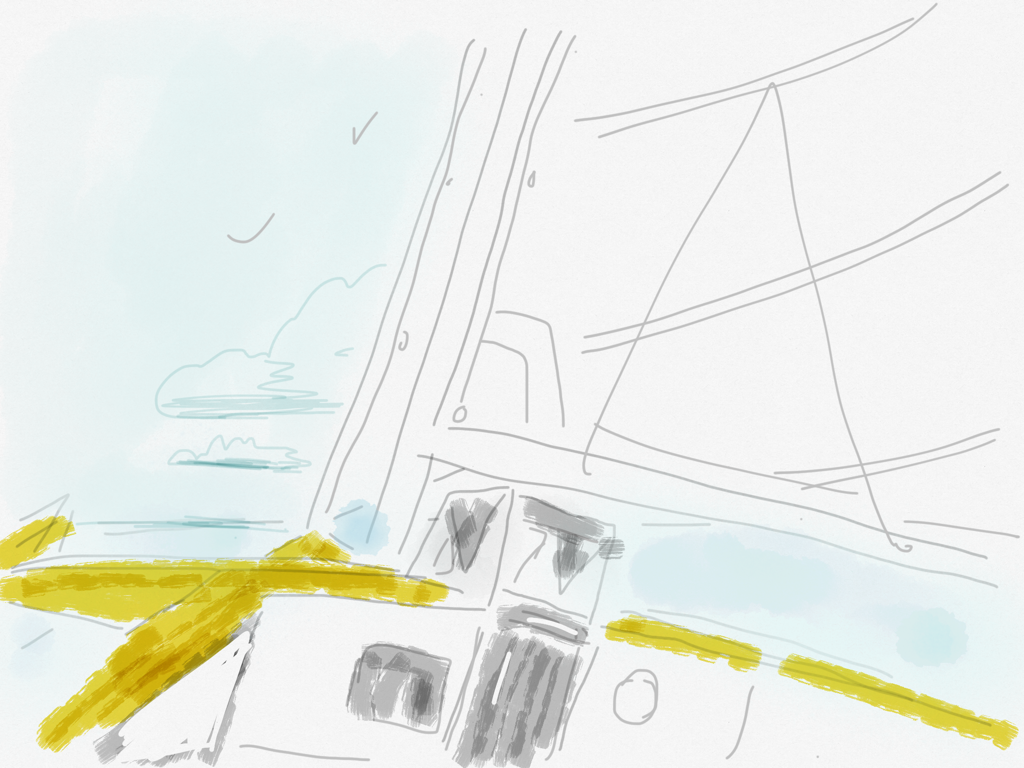 Another rum full of twists; the flying boats lose their wings and the one who does not fly wins for the third time. Bravo Francis! you confirm not only that old pots make good soup but that an “old” chef always has a surprise under his cap. You who sometimes gives the impression of not liking the competition, you would be the same to make your stars not to be under pressure and continue to concoct this discreet cuisine, without artifice but terribly effective. Obviously this kind of dish sometimes has a bitter taste for those who do not have your palate. Everyone knows that you do not need honors, and to avoid overdoing it, I am almost certain that you will soon find a way to escape the earthly obligations by claiming the urgency of bringing your ship back by the sea, and enjoying your kingdom again.

Plastic (not so) Fantastic, From our friends at Sailors for the Sea: