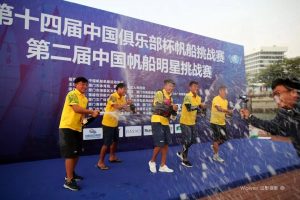 In its 14th year the ‘Club Cup’ as its known experienced a new weather phenomenon – RAIN.
Extraordinary as it may seem, but in the entire history of the event, neither the fleet racing preliminaries nor the match racing finals have had a drop of the wet stuff falling from the skies.
Largely the effect of an off-lying typhoon that was dissipated by strong northerlies, the sting in the tail was strong breezes driven by a keen north wind.
That didn’t stop the race committee banging off 14 flights on day one followed by 17 flights on day two and with 3 matches per flight the 6 umpires flown in from New Zealand, Hong Kong & China were kept busy with a total of around 90 races knocked off over the two days.
Day two was so cold in fact that the umpire team welcomed the pot noodles offered from the committee boat not with open arms, just open hands, more to return the feeling to fingers than any need for sustenance.
The umpire team even took their lunches while officiating on races grabbing bites from their burgers when boats in a match had reasonable separation.
That early 2 day push proved fortuitous as day 3 dawned with lighter breezes, which after allowing one flight to complete led to a complete shutdown with competitors voting with their feet (or at least their boats) heading for the dock a  good hour before the race committee finally gave up. It is amazing how fast rocking and rolling can propel a J80 through the water.
Day 4 wasn’ta great deal better but with sufficient round robin racing under their belt the skippers of the top 4teams, SailingIN (1) , Big Boys (2) , Xiamen Ocean Daren (3) and Yomovo (4) were ferried to the committee boat for the opponent, boat and end draws with the first races of the semi finals completed before the extended cut off time of 1700 for a race start once again curtailed racing for the day.
SailingIN proved just too strong for the local Xiamen Ocean Daren guys with a 2-0 whitewash while Yomovo managed to take a match out of Bing Boys before going down 2-1.
Both Final & Petite Final went to 2-1with the final finishing order reflecting the order of the round robins.
They were not done yet as winning the Challenger’s Knockout gave SailingIN the opportunity to sail against the defending champions, in much the same way as the Louis Vuitton Cup used to just select the America’s Cup Challenger.
Beijing Sailing Centre proved too powerful for Xiamen based SailingIN who went down to the now familiar 2-1 scoreline.
The day for the completion of the semis etc saw normal meteorological service resumed for Xiamen at this time of year with patchy blue sky, a bright sun and a pleasant developing breeze – perfect sailing conditions – AT LAST
That set up the final race of the day and the event, the ‘All Star Challenge’.
In this the champions face a team selected by the defeated challenger’s skipper and drawn from the top 4 teams. Last year this led to one of the races being described by one umpire (who incidentally has officiated at three America’s Cups) as ‘in the top 10 match races I have ever seen’ with victory won by about 10 cms.
This year Beijing Sailing Centre took the prize 2-1, the cause of the All Stars not being helped by an early  entry penalty which put them on the back foot, added to by a pre-start penalty and then a black flag. Too much pressure perhaps.
The prize was worth fighting for too – 250,000RMB with a further 50,000 RMB going to charity, both, of which were awarded at an area specially set up on the marina under the now setting sun.
Added to all the on the water activities were a varied set of evening social activities which helped to, once more, place this regatta (two regattas really) on the top of the tree in the Chinese sailing scene..
– Shanghai Sailor