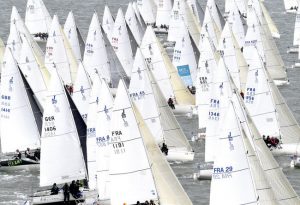 Big Pimpin’
For many sailors in the northern hemisphere Easter regattas are the first major test of a new season. Perhaps the most competitive Easter regatta of all is Spi Ouest – France’s largest inshore regatta and home to some of the world’s most competitive sportsboat and IRC fleets.
Boats are based in La Trinité-sur- Mer and racing takes place in the splendid surroundings of the Quiberon Bay in southern Brittany. The islands of Belle Ile, Houat and Hoëdic offer shelter and also spectacular scenery for coastal races. Lorient is only 15 miles to the north, which means the regatta attracts the cream of French offshore racing sailors who are based there. The beautiful scenery, consistent winds, and top level competition of Spi Ouest are a hard combination to beat.
The regatta is organised by the Société Nautique de La Trinité-sur- Mer (SNT). The club is undergoing a rejuvenation at present under the stewardship of its ambitious president, Antoine Croyère.
‘My fondest memories of sailing are of competing internationally – as a youngster racing around the world with Éric Tabarly and more recently racing double-handed in the Fastnet on my A35. One of my aims since becoming president of the SNT has been to have more international involvement, both of our club members competing abroad and with international teams coming to race with us,’ Croyère says.
To that end in 2018 the SNT joined forces with the RORC to organise the La Trinité-Cowes race, which will be repeated in 2019 and the club also hosted the 6-Metre Europeans in September.
Read on.

saved by the boat