There are already two high profile sailors out of the Route Du Rhum, with others reporting early trouble… 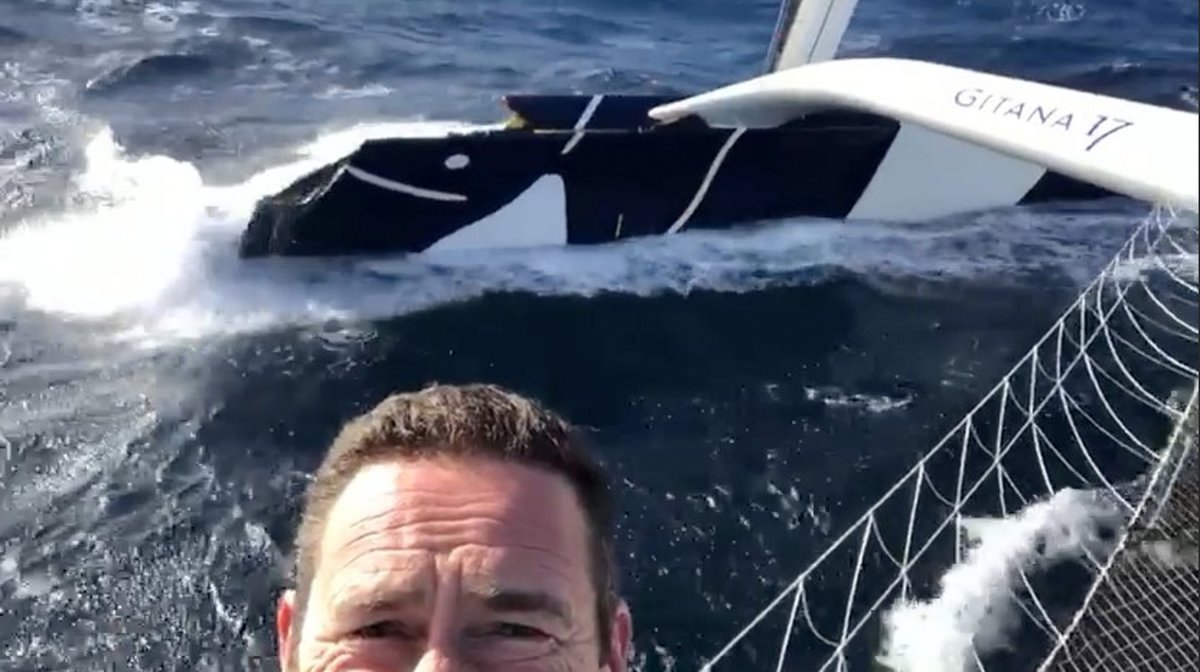 It has been a very eventful first 24 hours for the yachts competing in the Route du Rhum which started on Sunday from the port city of Saint Malo in France. The conditions for the start were picture perfect and the 125 strong fleet headed west on a fair tide and sailing in a fair breeze. Seb Joss on the Ultime Maxi Edmond de Rothschild took an early lead being chased down by Francoise Gabart on Macif and Thomas Coville on Sodebo but before the first night was over Joss and Coville were out of the race.
Joss reported sailing along in a steady northerly breeze when he heard a loud bang and the boat came to a violent halt. Going on deck he immediately realized there was substantial damage to the starboard float and he would have to alter course for Spain. He later reported that he has lost a large section of the yachts starboard float. A little later Thomas Coville on Sodebo reported that a forward cross-beam on his boat has broken. Coville was about 100 miles north of Cape Finisterre when he incurred the damage and he is now heading towards the Spanish port of La Coruna to secure the boat.  That leaves Gabart in the lead with Francis Joyon in second and in hot pursuit.
Shortly after the start there was a small depression and it gave an opportunity for the British sailor Alex Thomson to break from the fleet of IMOCA 60’s. Thomson opted to sail to the north of the depression and his calculated gamble paid immediate dividends. As soon as he turned Hugo Boss south he rocketed into the lead and this morning held a healthy 25 miles lead over Vincent Riou on PRB in second who leads Paul Meilhat on SMA by a scant mile. There is still well over 3,000 miles to go to the finish in Guadeloupe and anything can happy. It’s early days and to complicate things there is another, more dangerous front approaching scheduled to intersect with the fleet on Tuesday and Wednesday. They are forecasting winds of around 30 knots and a very lumpy seaway.
In the Class 40 fleet there are a number of boats bunched together at the front of the pack with Yoann Richomme on Veedol holding a slim 2 miles advantage over Louis Duc on Carac. One of the pre-race favorites Phil Sharp reported some damage on board. “I followed the sound of my alarm down below to find a huge amount of water inside the boat,” he said. “It was sloshing around. An access port in the ballast tank blew out causing 500 liters of water to be released inside the boat. It took a long time to bail out and now I have bonded it back in with Sikaflex so praying that it will hold.”  To give an idea of how close the racing is among the Class 40’s Sharp is currently in 9th place but he is only 10 miles behind the leader.
Most of the competitors are sailing in the Bay of Biscay and will all be keeping a very sharp eye out for the next front. The Bay of Biscay is one of the worst bodies of water to encounter rough weather. The fronts blow in from the west bringing large swells that bump up against the continental shelf under the Bay of Biscay.
This causes the swells to slow and get really steep and confused and when the wind increases the whole area is a cauldron. Many sailors claim, and for good reason, that the Bay of Biscay is one the worst bodies of water to sail because of the late autumn low pressure systems that roll in from the west. Fingers cross that all are safe as they deal with the next 48 hours. – Brian Hancock.
Read more here.

wonderful but not well