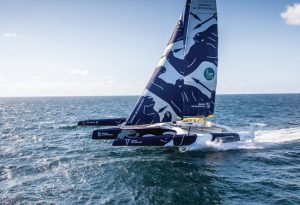 Big Pimpin’
The 40th anniversary Route du Rhum – Destination Guadeloupe will be an amazing race to follow. Included in the record-size fleet of 122 craft will be the Ultime Edmond de Rothschild – the first ever hydrofoiling maxi trimaran. Great reliability is required in the search for great speed and Harken hydraulics will help lift the maxi tri to new heights as it attempts to foil its way into the record books.
Edmond de Rothschild is a beast of a boat in a performance-orientated way. It measures in at 32m (104ft) LOA with a beam of 23m (75ft) and all-up weight of 15.5 tonnes (33,069 lb). The breathtaking feature of this boat is the pair of 5m (16ft 5in) tall hydrofoils that allow it to “fly” in winds as light as 14kts.
The Route du Rhum – Destination Guadeloupe is a singlehanded race measuring 3,540 nautical miles. Skipper Sébastien Josse will be alone in his pursuit of the race record of seven days, 15 hours (set in the 2014 race). He’ll be helming, navigating, trimming sails and raising and lowering the huge foils all by himself. A properly executed tack or gybe on an Ultime can take up to 45 minutes, at least 20 minutes of which is spent grinding hydraulic functions. It’s a workout fit for the best triathletes, while also requiring the concise decision-making ability of Stephen Hawking.
‘There has never been such a big foiling boat,’ says Edmond de Rothschild’s French designer, Guillaume Verdier. ‘There’s a bit of an unknown relationship as to what the environment will provide us with. It’s nothing like the America’s Cup catamarans, where the foil is piercing the water and the boat is fully out of the water. This kind of thing we will discover at a bigger scale.’
Read on.