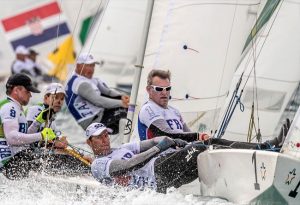 Big Pimpin’
A criticism of sailing from both inside and outside the sport has been the lack of an undisputed World Sailing Champion. You don’t have to delve too deeply into the Star Sailors League to realise that there is finally a solution
The countdown is on for the sixth running of the Star Sailors League Finals in the Bahamas. This event, which aims to decide the best sailor in the world, will again be hosted by the Nassau Yacht Club, with racing taking place on the warm, azure waters of Montagu Bay from 3 to 8 December. As usual there is a prize pot of US$200,000 up for grabs.
Times are changing in the Star Sailors League. For its first four editions the Finals were won exclusively by titans of the Star class: Mark Mendelblatt and Brian Fatih in 2014 and 2016; Robert Scheidt and Bruno Prada in 2013; and George Szabo and Edoardo Natucci in 2015. However, the applecart was upturned in 2017 when the British three-time Moth World Champion and Beijing Laser gold medallist Paul Goodison came out on top. Read on.