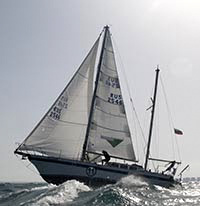 French solo yachtsman Loïc Lepage is expected to be evacuated from his dismasted yacht Laaland shortly after first light on Tuesday (23:30 UTC Monday). By then both the bulk carrier Shiosai and the sailing yacht Alizes II will have reached Laaland’s position in the South Indian Ocean some 670 miles SW of Perth Western Australia, and will await the arrival of an Australian P-8A search and rescue plane overhead before starting the rescue operation.
The forecast for the region is good – 15-20 knot winds and a 3 metre swell. The primary plan is for Lepage to be recovered from his liferaft tethered on a long line to his dismasted yacht, by a boat crew from the bulk carrier Shiosai. Francis Tolan, skipper of the S/V Alizes II, a Beneteau Ocean 43 competing in the Long Route solo circumnavigation will providie backup. If conditions prove adverse, then the MV Shiosai may provide a weather lee for Alizes II to conduct the transfer instead.
Lepage has been fully briefed by GGR Organisers and will evacuate wearing his survival suit and carrying a second EPIRB on standby, VHF radio, personal location beacon and his grab bag. He has set up a bright strobe light on deck and rigged his Echomax inflatable SOLAS radar reflector 2 metres off the deck.
The 62-year old Frenchman from Vannes has also cut away all rigging so that there are no water hazards around the yacht, and has his engine ready to start should he be called to manoeuvre his boat. Both Satphone and VHF radio are on standby for incoming communications.
The Australian P-8A search and rescue plane will remain on station until the evacuation has been completed. More here.

a shot in the dark