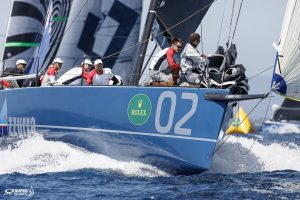 Big Pimpin’
No doubt about it, this year’s Rolex TP52 World Championship in Cascais was a real test of men and machine, certainly the final two days in 25kt+ conditions. All nine races were broadcast live; a mix of images from cameras onboard the TP52s, drones and RIBs brought the action live to computers all over the world and was widely watched with peak views of near 5,000 and total views of near 400,000.
In itself this is small fry compared with other sports but as the images are also picked up for broadcast by well-known channels like CNN MainSail, Euro News, the World Sailing Show and the Nautical Channel a potentially massive audience saw and will see one or more reports on the event. Coupled with that all 52 Super Series outings on Facebook, Twitter and the 52 Super Series website are measured and this ‘audit’ tells us that these have been displayed or viewed 2.8 million times in July 2018 alone. That cannot be just family watching their beloved…
In the end the winning display of sailing skill was produced by Quantum Racing and its battle-hardened team directed by Terry Hutchinson. Dean Barker on the helm is not a bad asset in these conditions, as was the boat and sails staying in one piece throughout all nine high-octane races.
Read on.