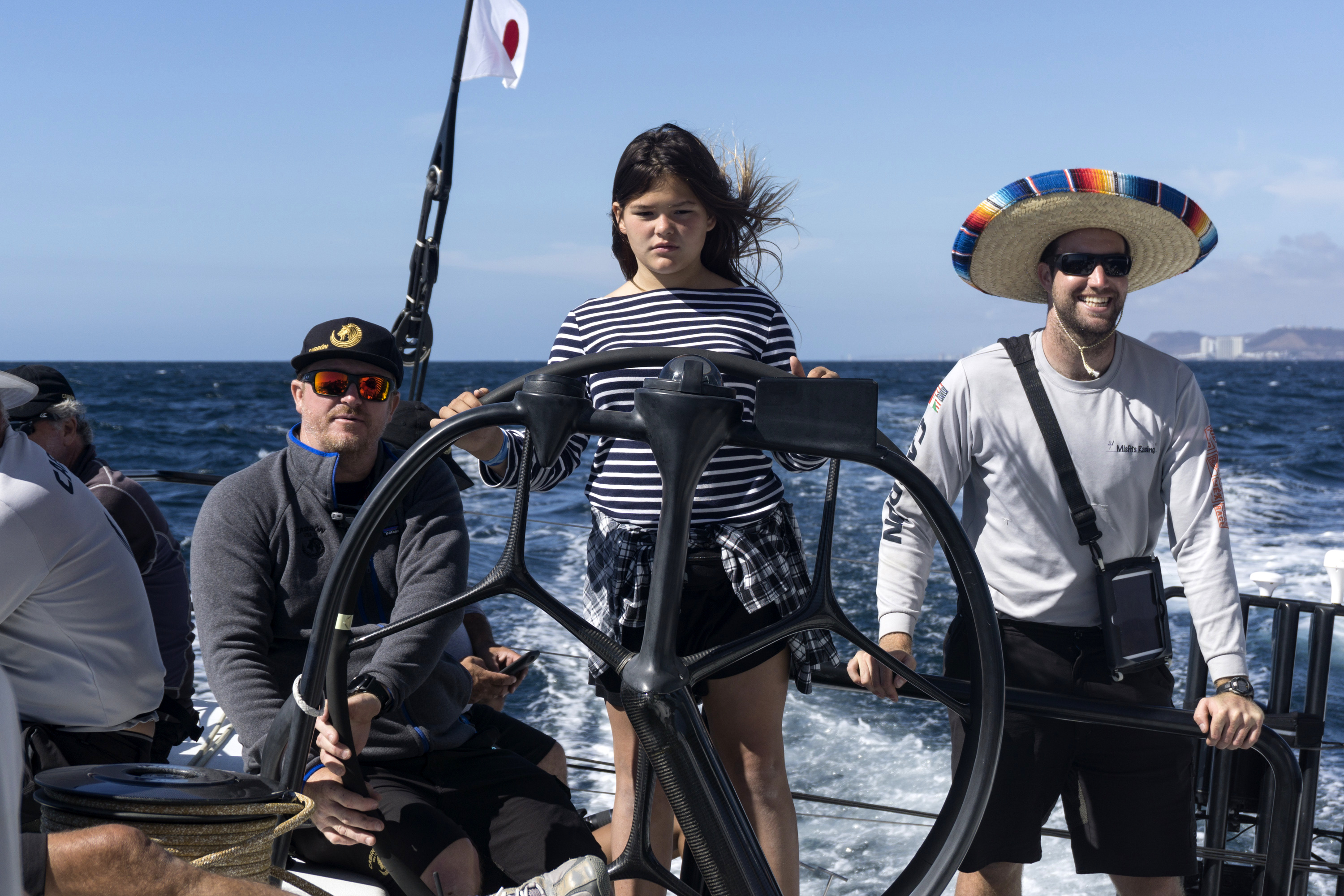 Steve Meheen’s Misfits Racing program took line honors in the 55th Little Ensenada Race this past weekend, the inaugural race for the team’s new boat, Cabrón. The elapsed time for Cabrón was 3hr 49m 42s. As noted on these pages earlier, Scot Tempesta’s A4 took first overall corrected time.
Little Ensenada is a classic SoCal coastal race from San Diego to Ensenada, Mexico–a benchmark 57-mile passage. This year’s edition delivered beautiful conditions: air so clear it felt like we could touch the islands and a building thermal breeze leading to VMG running in 15-20 knots of breeze down the Mexican coast and into Ensenada Bay.
For the crew of Cabrón, this first race was a chance to let the boat loose.
“We’ve had a big year refitting the boat after Steve purchased it,” said boat captain Josh Whittaker. “We got on the water as a whole new team. It’s a difficult boat to sail, so we’ve put in a lot of training. I think it’s come to fruition. Friday’s race went off smoothly. I was really impressed with how the team gelled. Everyone put in and we sailed pretty faultlessly.”
Cabrón is an 80-foot Botin-designed canting keel race boat. It was built in 2013 to contend for line honors in the Sydney Hobart race against the iconic 100-footers. For Meheen and the Misfits Racing team, it is an upgrade from the RP 63 Azhou, which the team campaigned for several years.
“It’s similar to Comanche,” says Whittaker. “Wide, lots of righting moment, very light. It’s like an eighty-foot version of that, in a way.”
Owner Steve Meheen has put together a mixed crew of amateurs and professionals, ranging from seasoned maxi yacht legends to Steve’s two young daughters (that’s Piper, age 10, helming at 20+ knots of boatspeed in the picture). Several of the core crew are drawn from US Patriot Sailing, a volunteer non-profit that seeks to support veterans by integrating them into sailing teams.
“A lot of my good friends are active Navy special forces,” says Meheen. “Through them I met the US Patriot Sailing guys. I try to keep them involved in everything we do. They’re great guys and provide a great service to the country. We need to do what we can to give back.”
Mike Rose is a core crew for Cabrón and the lead of the San Diego chapter of US Patriot Sailing. He sees many parallels between sailing and the military. In both endeavors, effective communication, trust, and situational awareness are essential to achieving the goal of winning. Cabrón, because of her extreme design, large crew, and complex operation, provides a particularly apt platform for the US Patriot sailors.
“Sailing Cabrón is amazing,” says Rose. “It’s not your grandpa’s boat. It’s a carbon fiber machine built to win races. It will sail faster than the wind. It’s a wet and wild ride. There will be rough times, but we’ll get through it as a team, as a unit. And we’ll have fun doing it because we have our brothers there to lean on.”
Because of the nature of their jobs, the US Patriot sailors excel onboard.
“They’re very focused,” says Whittaker. “Methodical. You can see their military training shine through. They plan out, assess, evaluate risk. They’re very professional in what they do, and it shows when they get out on the water.”
Going forward, the team plans on an active west coast racing and training schedule.
“We’re going to try to sail the boat as much as we can,” says Meheen. “We’re planning to get a few more guys from the US Patriot group involved as we go forward. And we’ll continue learning how to sail the boat fast and safe.
Thanks,
Will Suto

finding out true love is blind