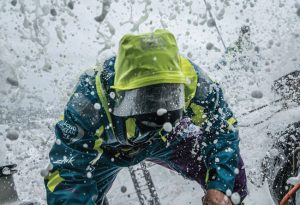 Big Pimpin’
There was so much new to celebrate about Dongfeng’s wonderful victory in the 2017-2018 Volvo Ocean Race and skipper Charles Caudrelier was refreshingly quick to give credit where it was due…
‘Thanks for your support and all you have done to improve our gear! We all have been impressed,’ said Charles Caudrelier to his partners, Zhik, when he and his Dongfeng Race Team became the first Chinaflagged team to win the biggest offshore prize in sailing, the Volvo Ocean Race.
They say it’s the little things that make the difference at the top level of sailing, and yes, it’s a cliché, but after that sensationally nail-biting climax in the Volvo Ocean Race, could anyone argue otherwise?
After 45,000 nautical miles around the world, the winning margin on the decisive final leg came down to 17 minutes, give or take a few seconds. It had been a brutal, relentless race around the planet.
Caudrelier knew that his crew would have to keep on improving from leg to leg, and the demanding Frenchman expected the same of his partners.
Bruno Dubois, the team manager of the Dongfeng Race Team, was also impressed by the commitment from Zhik. ‘You guys never give up. Your resilience is the same as our team. We almost feel obliged to use all the new stuff – we feel that we owe it to you after all the work you have put in,’ he said.
Read on.