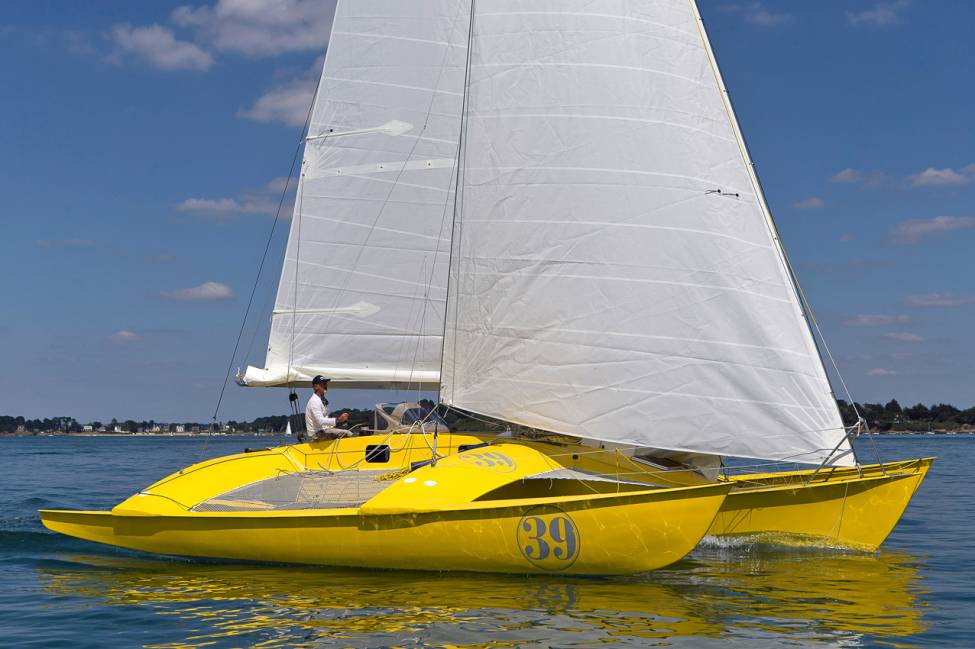 This article is straight up copied and pasted from Route du Rhum…
The Route du Rhum-Destination Guadeloupe “Rhum” multihull division is made up of 21 catamarans and trimarans that range in size from 39-59ft and are sailed by skippers who are almost all amateurs.
The fleet includes sisterships of the first winner of the Route du Rhum in 1978, Mike Birch’s Olympus. One of those sisterships – now named Happy – is being raced by the French solo sailing star and current Route du Rhum-Destination Guadeloupe outright record-holder, Loïck Peyron.
The Frenchman says of his choice of boat for the solo transatlantic race that sets sail from St Malo fort Guadeloupe on November 4th: “Though this Rhum will be no picnic, it will obviously be a homage to all the pioneers and those naval architects, thanks to whom we are here now.”
Peyron has achieved it all in sailing – race wins, world records, remarkable feats of seamanship, but these days he loves nothing more than to honour the sport’s history and traditions both in the way he sails and what he sails.
After entering the single-handed The Transat Bakerly in 2016 from Plymouth to New York in Eric Tabarly’s 1964 race-winning wooden ketch Pen Duick II, he is trying something similar in the Route Du Rhum with Happy, an historic old boat he found is a dreadful state five years ago in England.
Having spotted her for sale by chance on the Internet, Peyron hopped on a ferry and bought her there and then. “I came face-to-face with a boat that looks absolutely nothing like she does today,” remembers Peyron. “There were hatches and portholes everywhere, tracks, furlers, an outboard off the back, a cut-away bow…I looked at the hull number, it was No.2. No.1 is that of Mike Birch, winner of the first edition of the Route du Rhum, which was unfortunately lost in the Atlantic in late 1978.”
Peyron, 54, was transfixed by what he had found and set about restoring the boat he calls “little yellow.” After four months work he had her in the water ready for the 2014 Route du Rhum-Destination Guadeloupe. Then fate intervened when fellow French skipper Armel Le Cléac’h suffered an injury not long before start day and Peyron was asked to stand-in as skipper of the maxi-trimaran Banque Populaire.
Somewhat reluctantly putting Happy to one side, Peyron took up the role worrying that he was too old for this giant of a boat. But he then proceeded to blast his way across the Atlantic, taking line honours and setting a new outright race record for the 3,542-nautical mile course of just seven days, 15 hours and eight minutes.
It was a remarkable achievement by an extraordinary sailor. “You don’t really take it in at the time,” he said. “It’s only a few days later that you begin to realise what you have achieved. It’s a reality that exceeded all my dreams. It was so impossible a feat for me to pull off.
“I don’t do a lot of sport,” he added, “I’m not a top athlete but I do have a lot of energy, with a fair amount of output. And I manage my sleep very well; it was my 50th Atlantic crossing as I’ve been doing two-a-year since I was 19. At sea, I can visualise things well and anticipate any hassles. I think they call that experience.”
So this year Peyron is finally back, ready to complete the voyage he was dreaming of four years ago in a small yellow trimaran which will take quite a bit longer than his last trip to Guadeloupe. In fact he reckons he might get to finish in 22 days, all being well. But he will relish every day of that voyage and hope that he completes the course and not be forced to retire, as happened with Pen Duick II because of damage to the boat.
And will this be his last Route du Rhum? Possibly. “Yes, at some point you need to call it quits with the silliness don’t you?” he says laughing. “I believe it’s my last sip. Finishing off the Rhum like this isn’t a bad idea. Finishing in the slowest way possible and racing a symbolic boat, that rounds off 40 years of offshore racing.
“I was at the start of the first one at 18 years of age but I didn’t do it and now I’m on the startline 40 years later, so it’s all good,” he added.

Trouble in Paradise, Rescue Me

can’t ice these fuckers out