that boat is the bomb 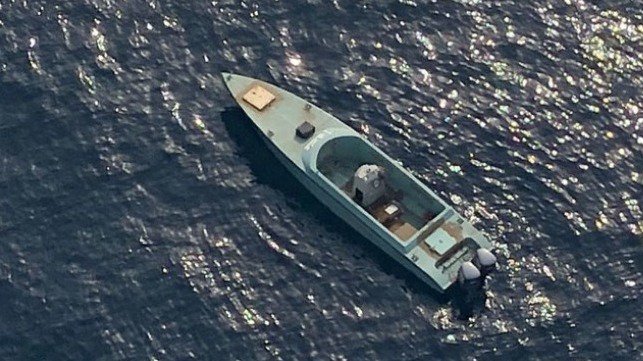 Not Sailing
On Sunday, Saudi Arabia’s navy reported that it had destroyed two remote-controlled, explosives-filled vessels that were targeting the port of Jizan (Jazan).
According to Saudi coalition spokesman Col. Turki Al-Maliki, the Saudi Navy detected the boats approaching in series, one at 0450 hours and one at 0505 on Sunday morning. They were under remote control and were rigged with explosives, he reported. Saudi forces intercepted and destroyed the vessels.
“The Joint Forces Command of the Coalition will strike with an iron fist all those who get involved with acts of terrorism, which threaten the safety of Saudi nationals, residents, economy and critical capabilities,” Al-Maliki said. “Those hostile acts will not go by without holding the ones executing, plotting and planning them accountable for their actions.”
The port of Jizan is located on Saudi Arabia’s Red Sea coast, just north of the Yemeni border. Houthi forces control much of the coastline to the south, including the Yemeni port of Hodeidah, and have used their territory to launch multiple attacks on Saudi vessels and installations.  Read on.

When Things Were RottenÂ… By Bruce Niederer