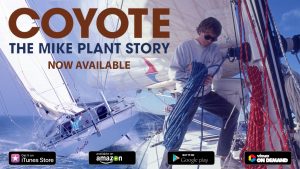 Almost a year after we devoted a pile of text on the subject (“The Best Sailing Movie Ever“), we are pumped to learn this badass sailing documentary about American adventurer and around-the-world solo sailor, Mike Plant, received a momentous deal with a big time distributor and will be available in your living room on a bunch of platforms — iTunes, Vimeo on Demand, Amazon and more.
COYOTE: The Mike Plant Story made some waves at film festivals around the world this year, including a Euro stop in Spain and a few awards to boot. It’s not often we see an authentic sailing film hit the screen and when we had a chance to watch it we were blown away. This thing is real and focuses on an American pioneer in the sport that came out of nowhere to put the stars and stripes on the map in around-the-world sailing… not to mention how it highlights Plant’s checkered past — The New York Times compared him to James Dean when he popped on to the scene for good reason (read: cocaine trade in South America and Interpol arrest warrant in Greece).
These stories do not come around often and director, Thomas Simmons (Plant’s nephew and first time filmmaker), pulled no punches, and highlights Plant’s prowess on the world’s oceans in an authentic and passionate manner. Definitely speaks to the sailor in all of us and transcends the sport to the dreamer and adventurer abound. You should definitely check it out. Sweet trailer here too.  Support this film on Facebook.
Tried to work this song title in, but it didn’t really work.- ed