blow the man down 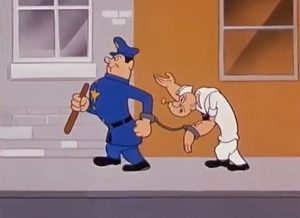 Criminal Sailors
A Seattle owner of a company that conducts sailboat sightseeing tours of the Seattle waterfront has been sentenced to nine months in prison for fraud.
Federal prosecutors say 67-year-old Paul D. LaMarche, owner of Emerald City Charters, was also ordered to pay about $330,000 in fines and restitution after admitting he collected disability payments while working as a sailboat captain.
LaMarche began collecting disability checks in the early 1990s after suffering a back injury and saying he could no longer work as a train conductor for BNSF. As recently as 2015, he reported that he was unable to lift heavy items and suffered debilitating headaches daily.
In reality, he continued to operate the sailboat company he had owned since 1984 and told the Coast Guard he had no physical limitations.
The U.S. Attorney’s Office in Seattle notes LaMarche appeared in promotional videos sailing one of the company’s two big, ocean-going vessels. He also appeared in a television feature doing yoga on a stand-up paddleboard.
Thanks to komo news.