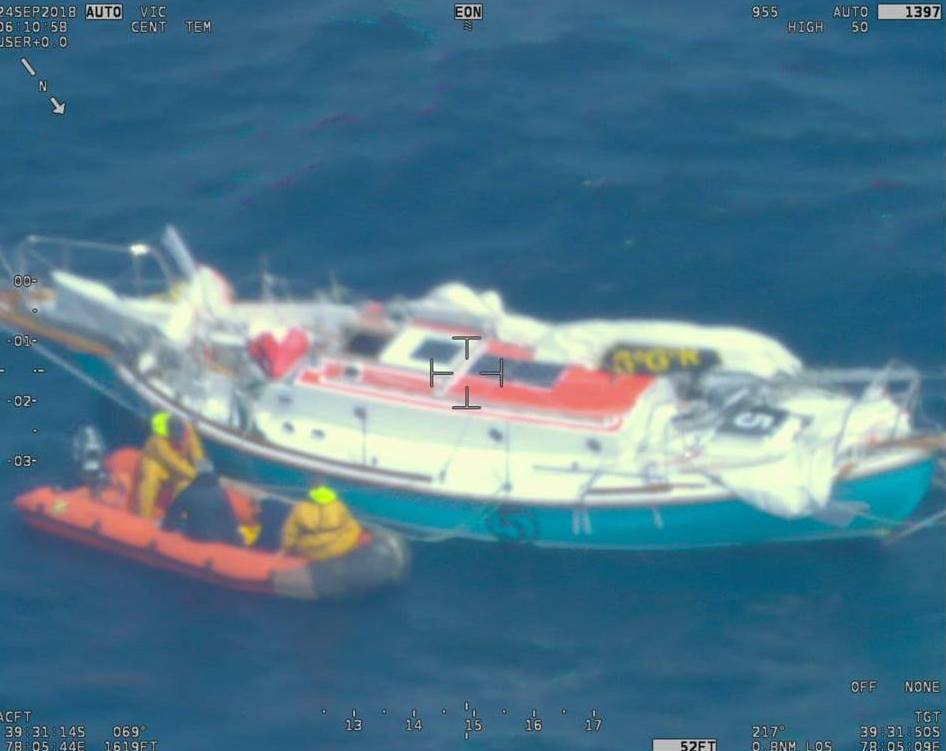 There was some high drama in the Golden Globe Race over the last few days that resulted in two sailors being rescued. It all started last Friday when race founder and organizer Don McIntyre produced a short video for YouTube that showed a number of intense low pressure systems rolling toward some of the competitors as they were sailing just north of the 40th parallel in the Southern Ocean. Three skippers in particular were in real danger; Irish sailor Gregor McGuckin, Indian sailor Abhilash Tomy and the Dutch sailor Mark Slats.
An intense low pressure system was fast approaching and the weather models showed gusts in excess of 60 knots. With nowhere to run or hide the three sailors braced for a thrashing.
The Golden Globe is celebrating 50 years since the original race which was the first  ever single-handed, non-stop race around the world. The competitors are sailing in boats that are similar to those that were around 50 years ago and as Don McIntyre likes to say of the race rules, “if you couldn’t get it back then you can’t have it now.”  In other words no modern amenities like auto-pilots, GPS and the like. The sailors are in a very vulnerable position with no ability to dodge weather systems. They have to take what they are dished up and on Saturday morning they were dished up some extremely violent weather.
Both Abhilash Tomy and Gregor McGuckin were dismasted but worse yet Tomy was very badly injured. In a dramatic text message to race operations he wrote, “ROLLED. DISMASTED. SEVERE BACK INJURY. CANNOT GET UP.” That was all the communication they had as Tomy retired to his bunk unable to move or reach his comms equipment. McGuckin reported that his mast was gone but that he was OK and Mark Slats radioed in to say that the conditions were horrendous but that he was managing and all was OK on board.
As soon as race HQ received the distress message from Tomy they jumped into action alerting all shipping in the area. The boats were midway between the Cape of Good Hope and the west coast of Australia and it seemed likely that the Australian navy would have some vessel in the area. The race organizers contacted the Australian Rescue Co-ordination Center in Canberra to coordinate the rescue effort. The Australians also reached out to the French Maritime Rescue Centre based on Reunion Island in the South Indian Ocean who attempted to source a vessel that might be able to assist. Tomy is an officer in the Indian navy and there were also notified in the hope that they might be able to assist.
As per usual in an event like this the race organizers also contacted some of the other competitors and asked for their help. Estonian sailor Uku Randmaa, 400 miles to the west of Tomy’s position was asked to divert course as was Gregor McGuckin who by this time had rigged a jury rig and was heading toward Tomy. Within 24-hours of being rolled there was a massive and coordinated rescue effort underway that included an Indian naval ship dispatched from Mauritius, as well as a number of aircraft that would fly out to assess the situation from the air. In the end it was the French fisheries patrol vessel Osiris that reached Tomy’s yacht first and at 05:30 UTC boarded to effect a rescue. The crew of Osiris launched a number of inflatable Zodiac’s and were able to stabilize Tomy and transfer him from his yacht to their ship.
Gregor McGuckin had closed to within 25 miles of Tomy and requested that he too be taken from his yacht. Without a mast and a fuel tank that had been contaminated during the storm, the Irish sailor decided that it would be prudent to abandon.  Both boats were left sailing and were not scuttled. There has been some discussion with the Indian navy about putting a crew onboard, starting the engine and making for an anchorage at St Paul Island 40 miles to the north where they would be able to assess the full extent of the damage and effect repairs if possible.
Tomy’s yacht Thuriya is a replica of Suhaili, the yacht that won the original Golden Globe with Robin Knox-Johnston as skipper. It would be a shame for the boat to be lost but that is the nature of the event. Of the 18 sailors that set out from Les Sables-d’Olonne in France 86 days ago, only nine remain with the 73 year old multiple circumnavigator Jean-Luc van den Heede holding a large lead as he heads under Australia bound for Cape Horn and points beyond. – brian hancock.

and so our day ends