This event, the longest running  regatta in China, which grows in size, quality and stature year by year drew to a close yesterday.
4 Days with 11 races completed in conditions from 8-15 knots with only 1 hold of around an hour on day 3 was as close to perfection as one could wish for with Mother Nature holding off nicely until the final evening when she let rip with a dramatic thunderstorm replete with thunder, lightning and torrential rain.
45 teams battled it out to climb far enough up the scoreboard to be invite back for part two and as a result no one held back.
Over the piece there were half a dozen General Recalls even with the “U” flag flying leading to the use of the Black Flag on a few occasions. Isn’t it amazing how a colourless piece of cloth focusses the mind of sailors as under the ‘black’ there wasn’t a single double toot.
It wasn’t the start line that the on the water judges were kept busy, it was  at the squeeze points of top and bottom mark. I simply cannot comprehend why do so many people try and charge in on port with no rights at the top mark. 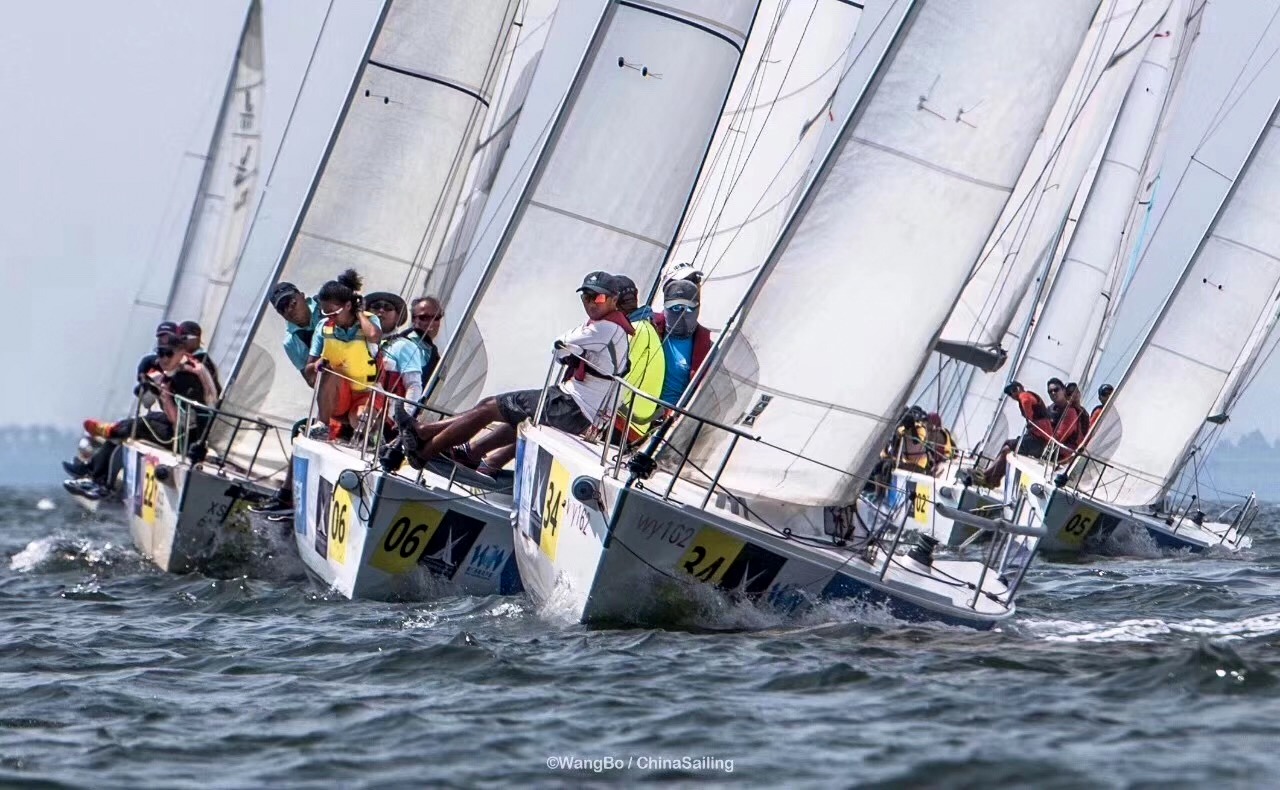 There can never be enough judge boats for a fleet of this size and, particularly on Day 3, there were multiple protests (eleven) , most of whom took their case forward to the room. A lot of he said – she said but few to challenge the experience of the judges. Whatever the result however, in the room defeat was handled by the competitors with the same apparent grace as on the water.
The event even was reported on CCTV5, China’s national sports channel with sailors being interviewed on camera. One was asked that with so many regattas in China, what makes this one so special. The response was that, amongst serious sailors, the Club Cup as it is often known is considered the Champion of Champions while another described the event as the ‘Mecca’ of Chinese sailing.
The growth of ladies in sailing in at a healthy level in China and certainly at this event with 70 female sailors participating over the last 4 days and 7 of the 45 teams being ladies only.
So, Part 1 of the 14th China Club Challenge Match has come to a conclusion. For a dozen or so years part one produces the fleet champion but also the 12 qualifiers who are invited back in a month’s time for the match racing part 2, a format now filled by a number of top events around the world.
The winner of that event then competes in a first to 4 challenge against the reigning champion from last year, hence the title of the overall regatta.
Solid, honest, well managed and policed racing with a good balance of social events in the evening. No wonder it is growing year on year and with the increasing skills and competitiveness of the teams umpires better put a fresh pea in their whistle for when they return to Xiamen in a few weeks time.
SS

the meth of sailing