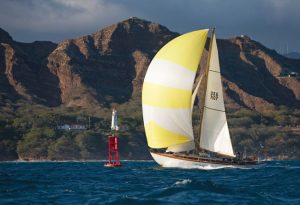 In July 2019, a large fleet of yachts will start Transpac 50, the 50th edition of the classic Los Angeles- Honolulu ocean race. Already there are nearly 50 entries, the strongest turnout in the event’s 113-year history.
‘We knew the 50th would be popular and we are preparing many special features,’ said Transpacific Yacht Club commodore Tom Hogan, ‘but we had no idea the interest would be so strong, so fast. Not only are there many return entries who still find this race attractive, but also newcomers who want to test themselves and their crews on a 2,225-mile race to paradise.’
Besides the iconic Barn Door firstto- finish trophy now being open to all monohulls under 30 metres in length, other new features include a new Corinthian Trophy awarded to the topfinishing all-amateur team. As with most ocean racing, amateur sailors form the backbone of the fleet and Transpac wants to recognise the efforts they make, given that many months, or even years, of intense planning and preparation are necessary to be competitive.
Read on.