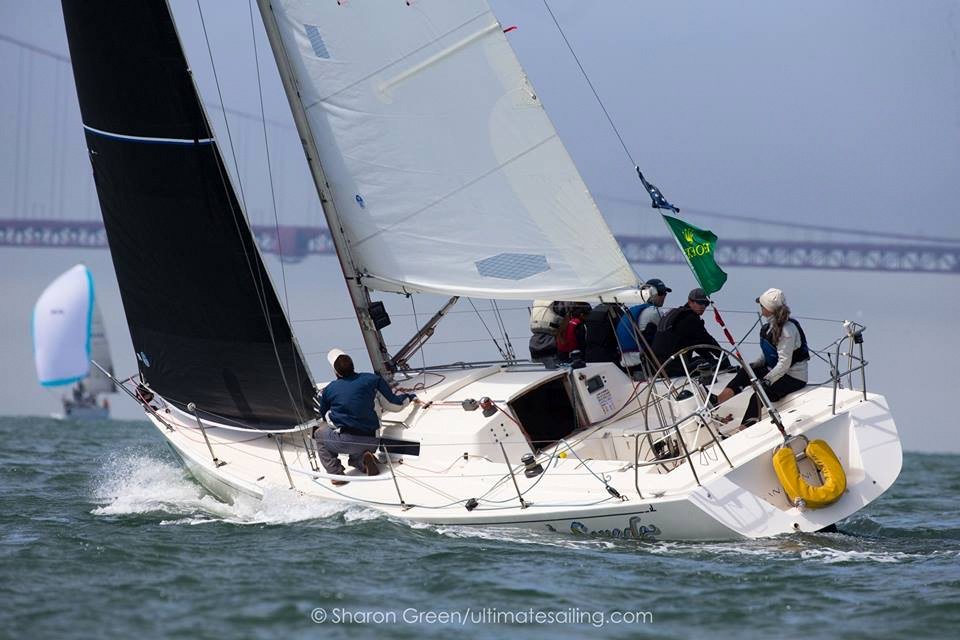 Say hello to Theresa Brandner, Commodore of St. Francis YC, and this week’s Sailor Chick Of The Week. Here she is driving her J-105 in Frisco. It is our understanding that she is only 1 of 3 Commodores to helm their own boat in the BBS since 1993. In addition, she’s been actively racing (24 race days so far this year) and has sailed on the Sonar, J/80, J/22, and J/105, and supporting 12 women’s sailing events and clinics during her year as Commodore of StFYC.
So we absolutely think Theresa Brandner is an amazing woman. We’ve had a few phone conversations, and have gotten to know her through some of the most bizarre circumstances imaginable…
Last week, we received a Contact SA e-mail from [email protected], nominating Theresa for SCOTW. The email included a photo that, while we liked it, we later learned was never meant for publication. We don’t know about the picture, but upon checking the STFYC website, we confirmed that the photo was indeed of her.
Cool, we thought, the rear commodore, from a yacht club of which many members loathe us, is reaching out. Great, we thought, let’s run it. All good, right?
Wrong.
It seems the photo was not actually sent by the Rear Commodore at STFYC; rather, someone sent us this email on our contact form, [email protected], and sent said picture that is, again, one that she never wanted published.
Why would someone do that? Was it sent with the intention of trying to fuck with this woman?  It sure seems like bullshit to us.
And yes, we got yoked, but we didn’t think this level of assholery was coming from someone at STFYC, and we don’t yet have any proof that it did. But from what we know, it is possible that someone (perhaps more) from the Good Ol’ Boys club there doesn’t like Theresa as Commodore. You see, Theresa won the election to become Commodore by a 2/3 majority, beating someone who apparently was favored by a board member or members.
We have been told that someone has engaged in a bizarre pattern of sending strange emails from phony e-mail addresses to the entire membership. Sending us the picture and pretending it came from the Rear Commodore of STFYC may be related to this.
We asked around – the people that we talked to love Theresa. This is such a cowardly and chickenshit move, and we are trying to find out who it actually is from.
But you arrogant, judgey and self-important a-holes in that club simply confirm that while we dig Theresa, we absolutely can’t stand Stuffy Saint Francis Yacht Club. Besides, any club that won’t let anyone wear hats inside their hallowed halls has to suck.
She’s far too good for the likes of you.

thank you, may i have another?

the boys are back in town

the last of the rainmaker