China Club Challenge Match – Xiamen
Day one of the event kicked off with the usual speechifying and scene setting that one gets used to at a Chinese regatta. Sponsors and those who helped make it possible were thanked then the current trophy holders official returned the trophies they had held for a year to the organizing committee.
Then in a move which echoes the spirit in which this particular event is run a representative of the officials followed by a representative of the competitors took an oath on behalf of their respective groups that they would rule fair and play fair it the four days of competition that would follow.
And so to the water. During the days the early portent of the growing cumulus clouds gradually bore fruit as the initially gentle breeze grew into a nice sailing wind.
The three schedules races were keenly but fairly contested under the on the water judges team led by IU/IJ John Rountree (NZL). No surprise there as with 2 America’s Cups and 8 Sydney Hobarts under his belt little was likely to get past him and his team. 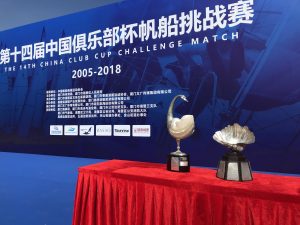 Starts were crowded with a line that was even but as always so many people seemed to favour the committee boat while the further down the line boats went the closer to the favourable tidal current they were. It is funny how lemming like sailors can sometimes be when it comes to that right hand end of the line. Lots of shouts but few red flags in evidence with some of them somewhat lacking in the “conspicuously” department.
They were certainly keen to get going with no fewer than 3 general recalls across the races with the “U” flag frequently going up at the 4 minutes in an attempt to curb the apparent enthusiasm to cross the line early. In fact a lot has to be said for the patience of the Race Officer in that he didn’t go to the black flag at any point in the day.
In fact the only black flag of the day went to a competitor who, having been penalised didn’t complete his penalty ( he did  part of one) and sailed on and, sadly for him, rules are rules.
He gave some verbal to the judge boat which frankly wasn’t considered an issue but such is the spirit this regatta is run along with the respect for the rules that the skipper then contacted the Race Committee to apologise, an apology that wasn’t required but welcomed in any case as his rule infraction was considered to be through a lack of knowledge rather than a deliberate rule breach.
So one day and three races of a programmed 4 days and 11 races down, 3 days to go. Already shaping up to be another China Club Challenge Cup to remember. – SS.