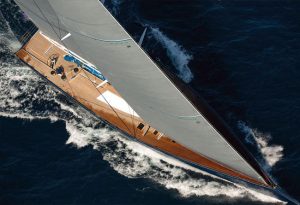 Big Pimpin’
If by a man’s works shall we know him, you’re already well acquainted with Gianni Cariboni. His company has been involved with Wally Yachts since its inception, supplies all the Volvo Ocean 65 hydraulics, and has been involved in every America’s Cup cycle since 2000.
He’s just returned bronzed and relaxed after a holiday in Spain and he’s already back on the case. ‘When I got back this morning I spoke with the New Zealand America’s Cup team, with Luna Rossa and with other customers. The factory is running well. We’ve just started testing a new system for the Solaris yard and we’re also delivering a very interesting system for Vismara’s Nacira V69, a canting and lifting keel – and it’s nearly Friday so everybody’s happy.’
This family-run company’s position at the apex of marine hydraulics has a long backstory, peppered with groundbreaking innovations, but it all began very modestly. “My first job was teaching, but I was sailing all the time and in 1972 I got a job as director of production for Canclini, building 4,500 aluminium masts a year for Ton classes and European production boats.”
“I left the company in 1984 and opened a design office. The following year I opened a small workshop making aluminium daggerboards for multihulls,’ Gianni continues, ‘and, in 1986, we made our first aluminium mast, for a C-Class catamaran. Our first hydraulic components were built for the 36m ketch Magdalus III in 1987, two big stainless steel power packs, one for the captive winches and another for the backstay, vang and outhaul.”
Read on

leader of the (small) pack