welcome to the laboratory 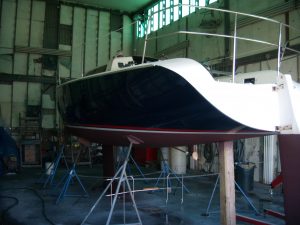 Big Pimpin’
The most physically demanding Volvo Ocean Race of recent times has just finished and there are some young (and older) sailors with a new appreciation of just how unyielding the seas can be. The incredible drone footage of the Volvo Ocean 65s piling along through the Southern Ocean and across the Atlantic at recordbreaking speeds has really brought home just how unrelentingly brutal and wet these boats are. Too wet, some would argue, especially when you compare the Volvo Ocean 65 with the sheltered comfort of a cockpit on a modern Imoca 60.
In the absence of much shelter from the one-design Volvo Ocean 65, the next best thing is to make sure you’re suitably equipped for the firehosing that you’re about to receive as you venture out on deck for your watch. Three of the seven teams in this lastest edition of the Volvo Ocean Race opted for Musto technical clothing, which has been worn by more sailors in the 45-year history of this famous race than that of any other brand.
In 1994, Musto was originally established as one of the most reliable and peer-recommended brands in offshore sailing, yet it was the formation of a partnership with Gore in 1991 that really led to a significant development in the performance of modern offshore garments such as HPX, which was launched in 1994. It should be said that Gore-Tex fabric is by no means unique to Musto. In fact, it’s used by many of the world’s most trusted outdoor apparel brands as their pinnacle technology for waterproof, windproof and breathable protection.
However, it’s the work that Musto has done with Gore-Tex that makes the partnership unique. Gore’s product specialist leader, Alan Douglas, comments: ‘When GORE developed Gore-Tex Ocean Technology in 1994, Musto was instrumental in the testing and validating that this technology was fit for use in extreme, extended ocean racing. We’re proud that ever since that early R&D work nearly 25 years ago, Gore-Tex fabric continues to be the product of choice for professional ocean sailing.’
Read on.