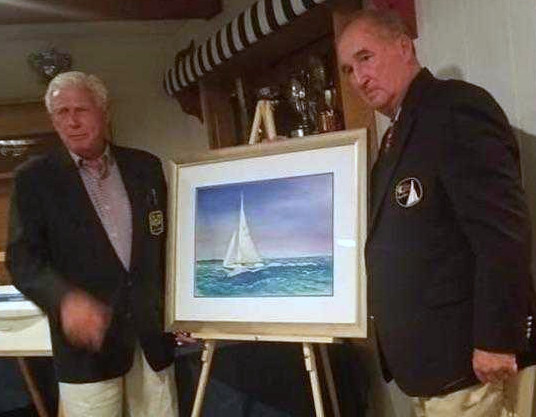 Local Knowledge
With the Paw Paw Lake Star Fleet founded in 1932 hosting its first Great Lakes 4th District Blue Star Championship, it was organized as old school – the good old school. All competitors were put up at club member’s lake homes. Each skipper and crew received a gift bag with a Paw Paw Lake Yacht Club hat, small bottle of Mount Gay Run, and other nice things. After registration and measuring on Thursday all headed over to ArcLight Brewery, where a special beer was on tap – “Blue Star Pilsner.”
Hot cooked breakfast was served at the club each morning. Bag lunches onboard all boats two days with Sloppy Joes at the final awards ceremony on the final day. Beverages and snacks in the boat lot (keg with tap, remember those?) after sailing. Dinner at a lake house one night, and the Clubhouse the second night.
The facilities were greatly improved over the past year for this event, from the hoist, removing mast conflicting trees, adding docks, setting up ample hoses for wash down, dedicated hoist operators, and many sponsors.
Why? The purpose was first off to incite camaraderie. To keep those who love Star boats together for three entire days to enjoy the entire experience. To build stronger bonds and friendships. Following what Offshore sailor Jim Hellquist from Waukegan Yacht Club says, “Racing is really all about the party.”
The Crew was the entertainment Friday evening. How? Each filled out a questionnaire at registration answering three questions: 1. Who is the highest government official you ever met?; 2. Who is the biggest celebrity you ever met?; and 3. What was your favorite race or series ever? The answers were great with having met the King of Spain, George W. Bush, Senators including McCain, Governors and local officials, Halle Berry, Lebron James, Rham Emanuel, Will Smith among others. A lot of Star regattas were mentioned.
With Saturday evening, the Skippers had answered the same questions. Answers were Governors, Senators, etc. until Jack Rickard answers were 3 Kings, 1 Queen and 5 U.S. Presidents – wow. Skippers met Colonel Sanders, Phyllis Diller and others with notoriety. The races the enjoyed ranged from Star regattas to Offshore big boat events.
Then a special presentation done by 4th District Secretary Terry Gibney, Jack Rickard and Gill Cole, honoring Gene McCarthy’s 70+ years racing Star boats. Gill Cole water color painted one of Gene’s early boats he owned for 26 years, ‘October’ 3130 from a black and white photo from Yachting Magazine. October with Gene at the helm has a rooster tail shooting out the back end while passing a powerboat that was doing 27 knots. Results.
– Glenn McCarthy.

give me liberty, or…