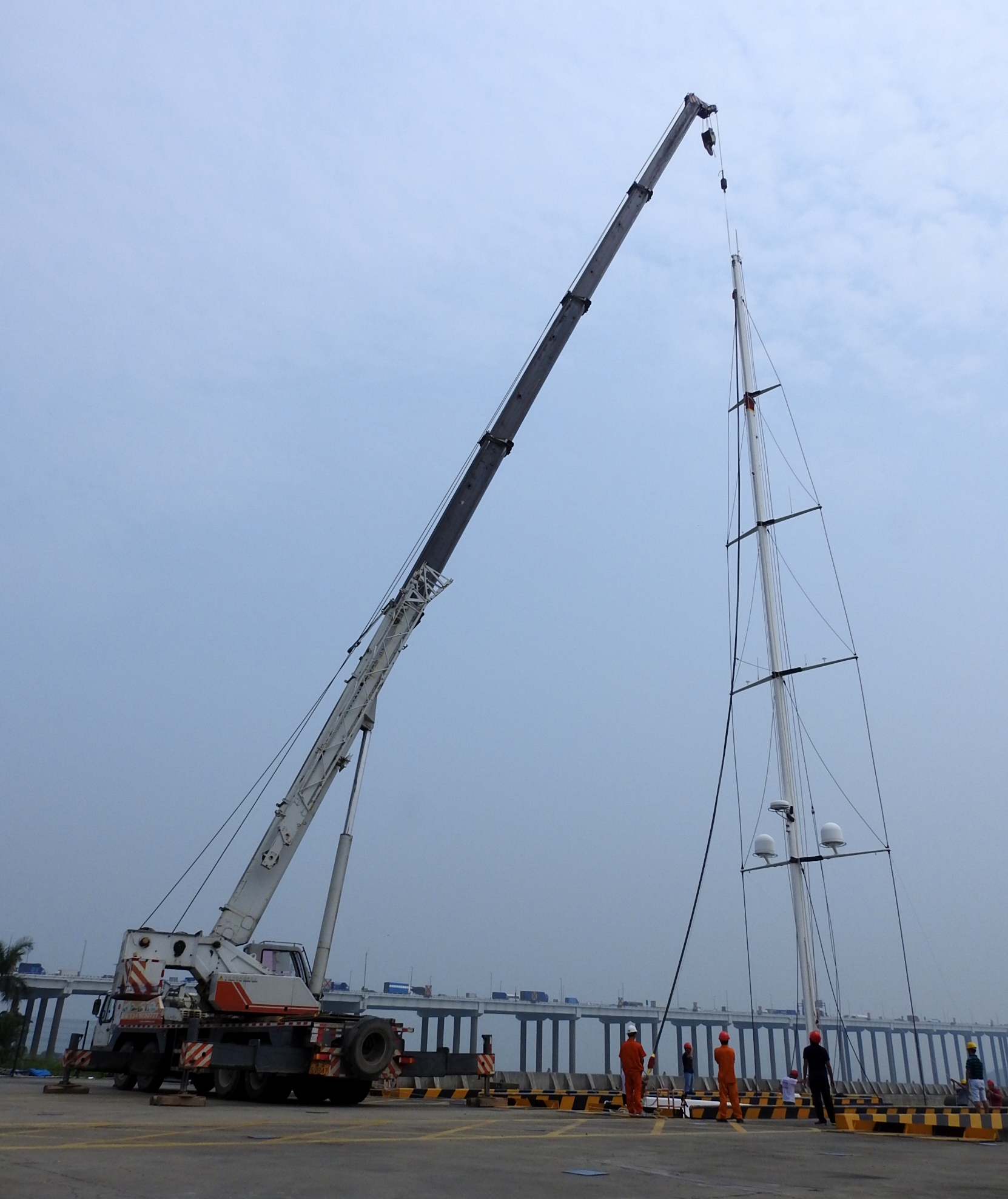 We had to take the big Swan for a refit recently. Well, when I say big, at 82 feet overall she is the biggest sailboat in China.
What could be so difficult, we were moving her from Shenzhen, round the bottom of Hong Kong to a yard in Zhongshan near Macao. About 100 miles or so, the weather was good, passage plan had the boat arriving at the yard around high water, pull the rig, lift the boat, no worries.
Only concern was the Hong Kong Macau Bridge, one of the longest in the world but on checking the chart, it was a bridge/tunnel dipping under the main shipping lane with more than enough depth so all should be good to go, and it was until ….
Around 5-6 miles short of the refit yard it was noticed there was a red line over the channel. Now that wasn’t on the earlier chart. On zooming in on the plotter, (thankfully being up to date with the latest Navionics) was a high voltage line showing an air draught of 34m. Bugger – we ‘drew’ an air draught of 36m. Now 24,000 Volts and a carbon mast don’t mix, no matter how you view it.
Now good passage planning came into play. Alternative port! Nansha Marina had recently (earlier this year) hosted the Guangzhou stopover of the Volvo Ocean Race which required the marina to have dredged all tide depth of 5m, could they help?
A quick phone call outlining the situation to Albert Khong, the General Manager and one hour later all the logistics had been checked and we had the green light to berth at the marina and extract the rig there.
The two riggers were already inbound from Nautor in Palma and they simply diverted to Nansha instead of Zhongshan.
With 35 years of experience between them, quite a bit of it with rigs even bigger they knew what they were doing but when they told me it would take a day to prepare I began to wonder. However the rig has 4 20x20s on the mast, VHF, AIS, Satellite dome, TV dome, spreader lights, steaming lights, sailing lights, anchor light, deck light, under boom lights, hydraulic vang and hydraulic outhaul plus halyards and reefing lines as thick as your thumb all to be carefully disconnected and prepared. The mast alone was 37m and weighted 1,200kg and had to be protected from rubbing while hoisted.
37m meant we needed a crane with 40m+ reach – the marina had it organised within the hour. It arrived early so no delays and the boat was moved into the travel-hoist bay. All I can say about that is I am glad the owner didn’t buy a bigger boat because even the 82 only had a few inches either side as she was nosed into position.
With everything disconnected the actual lift was remarkably easy but how do you get a 121 foot vertical something to become a 121 foot horizontal something? Actually, when you know what you are doing (I didn’t) it is incredibly (or at least appears incredibly) easy. Attach a heavy forklift truck to the mast foot and start reversing while at the same time the crane driver starts to lower away and before you know it the mast is in its cradles. 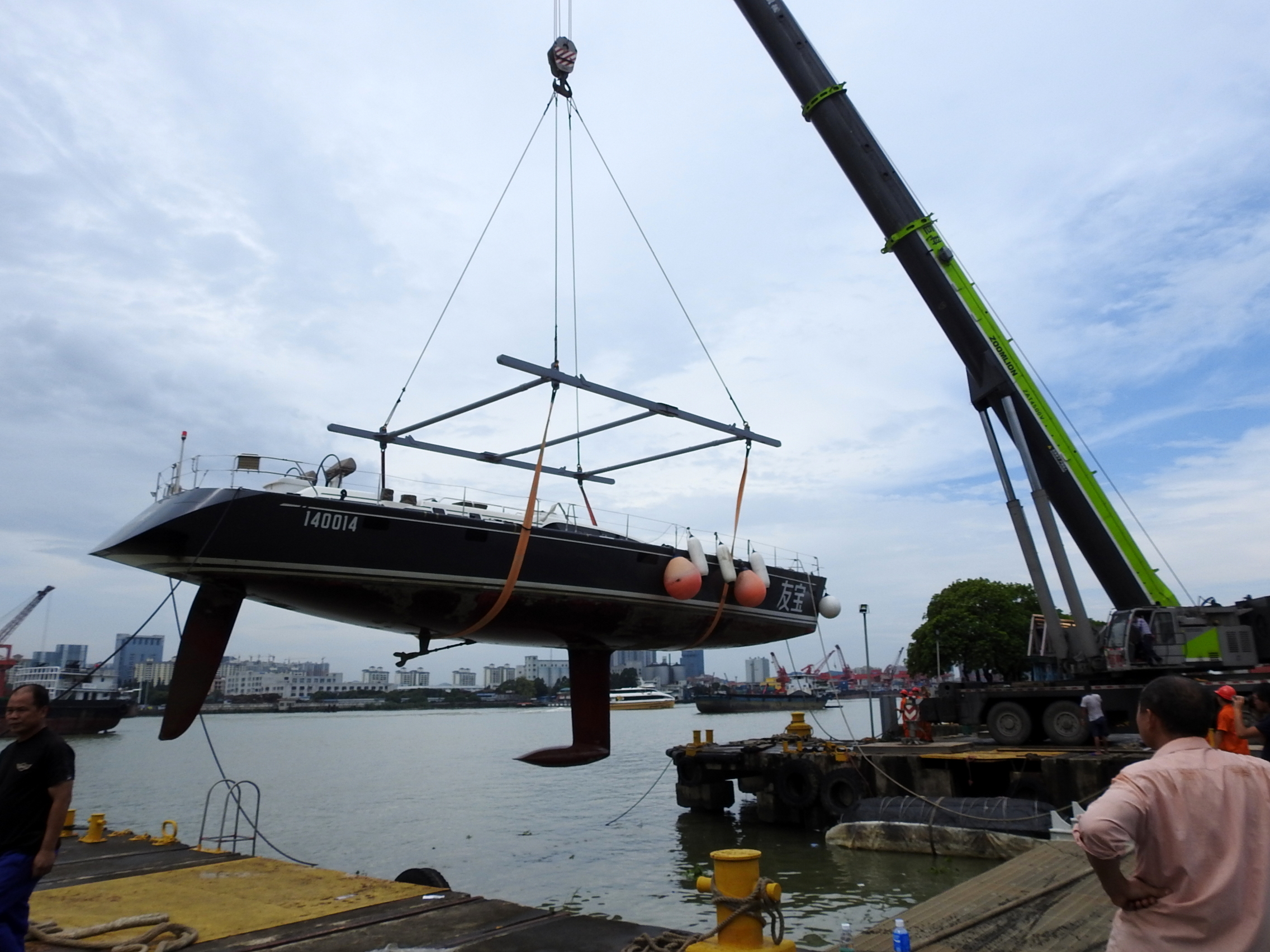 The 82, now looking like a sleek motorboat,  was then motored round to the yard, now easily passing under the 24,000 volt power lines to be lifted and the refit to begin.
The yard, Kingship is primarily a builder of Superyachts and the only one in China I know capable of producing yachts to rival the larger European builders with one of their yachts even featuring in the glossy superyacht magazines but lifting a 40 odd ton sailing yacht for re-fit was a new experience for them.
Happily they took their time and the Swan is safely in the shed and hopefully in a few months’ time, like the fairy story she will re-emerge from the shed to the comments “She’s a very fine Swan indeed” (Sorry but I couldn’t resist that.)
– SS.