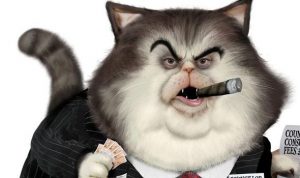 The resignation of respected measurer Carlos De Beltran last week after just a year as World Sailing’s Technical and Offshore Director was a little suspicious.  Yesterday,  an even higher-ranking critter jumped off what many now see as a full-on sinking ship. We’re talking about the resignation of Chief Commercial Officer Hugh Chambers– the second-in-command at W.S. and the guy responsible for all sponsor development and sales for sailing’s international governing body.
Was Chambers asked to leave because his team’s total sponsorship take was a fraction of the decidedly optimistic WS’s 2017 Budget?  After all, the recent ‘reforecast’ showed the organization lost millions more than budgeted for 2017 with 2018 looking like another ‘adjustment’ might be on the way.  Or, like Beltran, did Chambers see the writing on the wall and decide to get out before things get really ugly?
While many question what, exactly, World Sailing is doing to actually govern the sport besides supporting the Olympics, it’s clear that whatever they’re doing, costs have spiraled completely out of control and the burn rate is far beyond sustainable.
The Corporate HQ move from Southhampton to ritzy London cost a small fortune, pays 4 times more than the previous lease, and commits to more than GBP 3,300,000 (US$4.3M) in lease commitments.  Salaries and travel have risen massively as a percentage of the budget, and there is literally no escape plan.
Without a major change to the governance of World Sailing and the administration of the sport, in a few years time there will be no World Sailing.  The non-sailor CEOs and marketing types will be gone, and as usual the volunteers will have to pick up the pieces and start over.
We will have more on this developing situation – and we haven’t even gotten into the anti-trust stuff yet – and we plan to send those interested in a World Sailing corporate document dump to Dropbox as soon as we can.

all i want for x-mas…

blue is the new orange?