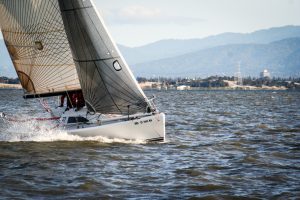 Big Pimpin’
Southern Spars, the worlds leading bespoke carbon fibre spar maker, has announced it will be supplying the rig to the INEOS TEAM UK for the upcoming America’s Cup.
The America’s Cup – fondly known as the “Auld Mug” – is the world’s greatest sailing regatta, with the next edition taking place in 2021 in Auckland, the home of Southern Spars. As the competition returns to their home soil, Southern Spars are proud to announce that they will be supplying the rig to the newly formed INEOS TEAM UK.
INEOS, one of the world’s largest manufacturing companies, recently announced their America’ Cup challenge – joining with Sir Ben Ainslie in the biggest ever British investment in the Cup’s history. Ainslie, the world’s most decorated Olympic sailor, will take the lead in designing and building the boat program, as well as skippering the racing yacht. Read more.

it was all yellow