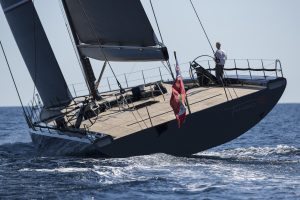 The Biz
According to Italian newspaper Il Corriere della Sera, the Ferretti Group is in negotiations with Wally to acquire the Monegasque brand of sailing yachts and powerboats founded by Luca Bassani in 1994.
“We have been in negotiations for months,” Feretti CEO Alberto Galassi told the paper. “We strongly believe in this acquisition, because the brand is extraordinary and in strong synergy with the other brands of Ferretti Group. But it is a very complicated operation.
“The agreement could be signed by beginning of next year, if all the necessary conditions are reached,” he said.
The investment, which according to Il Corriere della Sera amounts to some €25m-€30m, would signal the Ferretti Group’s debut in the sailing world – a key move for the Italian company, which is majority owned by China’s Weichai Group (Piero Ferrari owns a 13.2% share).
The Ferretti Group has a portfolio of brands encompassing Ferretti, Pershing, Itama, Mochi Craft, Riva, CRN and Custom Line, and a production value of around €623m in 2017. Read on, thanks to IBI News. Photo thanks to Gilles Martin-Raget.