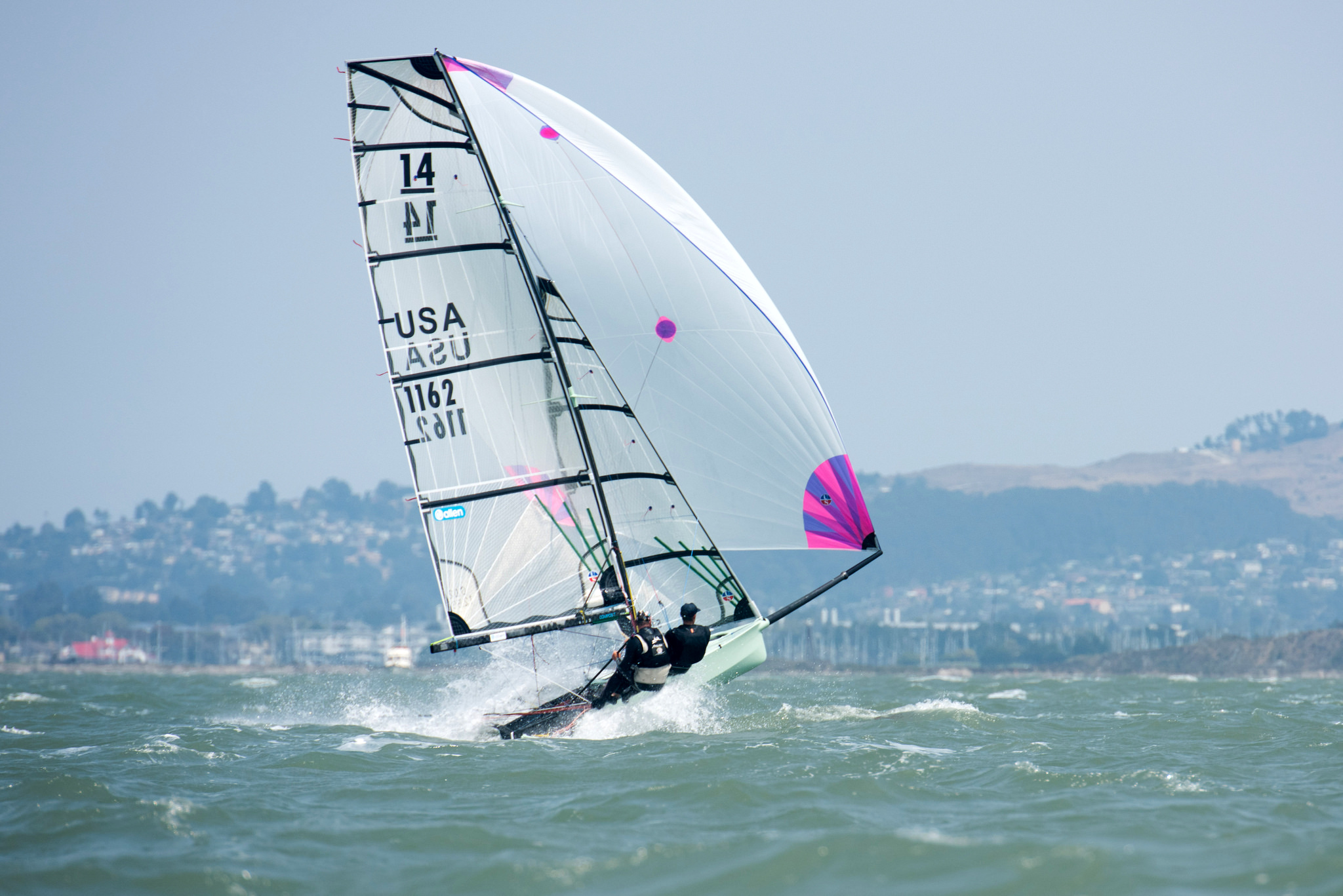 An incredible 62 boat International 14 Worlds just wrapped up in San Francisco.  Richmond Yacht Club did a tremendous job hosting the event with 160+ volunteers on and off the water coupled with world class racing made this event one of the best 14 Worlds competitors can remember.  The Berkeley Circle delivered on the conditions with the main 8 day event being held in the main ‘slot’ of the circle with the Team Racing pre-event being held closer to RYC.
The two-day 4 on 4 team racing event is the original 14 Worlds dating way back (1940’s?) – won again by the British Team “Shake n Bake” finishing Team Australia after the Aussies beat out Team USA in the Semi’s.   A big party night was held at the conclusion of teams – with a lay day, measuring, and practice race to follow. A lot of antics at the Team Racing party that I believe only a 14er would understand – best to be there!
The main event for the Individual Worlds is a format of 7 grueling races over 8 days. Long upwinds, fast downwinds and a few triangles to keep the kite sizes in check.   Fog hanging over SF and clearing skies East turned on the breeze and the Bay delivered what the Skiff Sailors came for.  Race one had breeze hitting in the low 20’s and Father/Son team Andy and Tom Partington took the win in their orange boat Penguin Dance followed by wicked quick Neal Jones and Ed Fitzgerald in Scrumpet.  In addition to keeping the boat upright, a big part of skiff sailing in big conditions is having the boat well prepped and minimizing the big mistakes.
Breakages can and will happen and a windy Race 2 with wind hitting the upper 20’s proved to be tough for most of the fleet.   Piles of boats stacked up on the gybe downwind and letter scores hit half the fleet on this big day.   Andy & Tom took race 2 with Aussies Marc Kristic & James Lanati getting 2nd.   A few broken bow sprits and boat parts, but the fleet got on the carbon repairs quick and came out for day 3.
Day 3 was super fun with wind again hitting the lower to mid 20’s.   Aussies Dave Hayter and Trent Neighbor were excellent and pulled out the win followed by their countrymen and fastest ‘Masters’ of the fleet Lindsay Irwin & Andrew Perry.   The Partington’s suffered a failure on their rudder and finished 25th mixing the scores up quite a bit.   Day 4 had conditions much like Day 3 and top German team Georg Borkenstein & Eike Deitrich did what the do best and went fast in the big breeze to take 1st place and the first ever Worlds heat win by a German team.   Boat designer Daniel Holman and crew Alex Knight were second in their awesome looking craft ‘Helly the Pelly’.
A well deserved lay day met the fleet after some loud Monday night parties around Pt Richmond.  After the fleet dispersed for mostly City or Napa tours the boats were rigged up again for Race 5.   With a high pressure coming in, much lighter forecasts came in for races 5, 6, 7 – however, being SF Bay lighter just means medium plus conditions for most parts of the world – Racing became more tactical with the shifts and currents playing a much bigger factor.   The Father/Son Partington team showed they were still top of the heap taking race 5 and then holding on with a pair of 3’s on the last few days.   Marc Kristic took race 6 and the Brits Doug Pattison and Mark Tait took the final race.
A huge congratulations to Andy and Tom Partington for winning this World Championship – they’ve been close multiple times before and put in a lot of work to get ready for San Francisco.    Can’t say enough good things about Richmond Yacht Club’s great organization and race courses – and members providing billeting for virtually the entire fleet, rolled out 100’s of meals, and this effort made a huge impact on getting boats here.   International 14 skiffs are a challenge to sail, extremely fast, and can be very technical, however the respect amongst competitors is extraordinarily high and only surpassed by the camaraderie and fun had off the water.  This is what keeps the fleet going strong and coming back year after year.
Well done and everyone is looking forward to the next 14 Worlds, where we are told by the Perth Dinghy Sailing Club 14ers that with the high wind and flat water is the fastest track in the world!
results
2018 Worlds site
2020 Worlds site
Photos credits: Byung Choung. Story Terence Gleeson

the pride of florida

don’t get high off your own supply