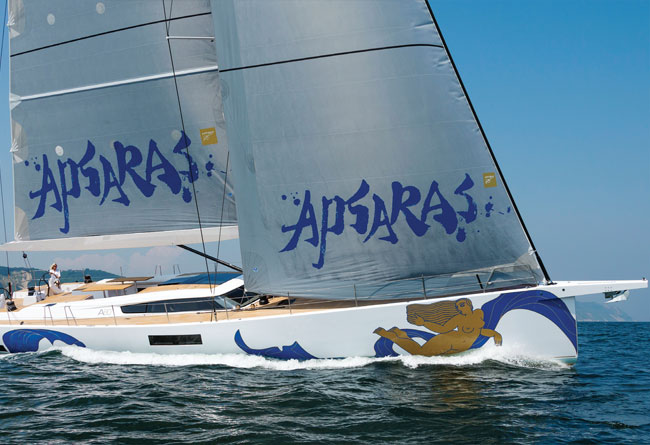 Big Pimpin’
The sea trials of the first Advanced 80 from Italian shipyard Advanced Yachts can only be described as rigorous… three years in and counting
‘After the launch in summer 2015 she crossed the Atlantic and won the ARC’s Cruising A category on elapsed time, then cruised in the BVI before coming back to the Med for summer 2016,’ explains Luca Pedol of the A80 stylists Nauta Yachts. Then she sailed across the Atlantic again in 2016 and cruised in Brazil, South Africa, Madagascar, the Seychelles and Thailand. She’s now in the Philippines, where she won the Commodore’s Regatta in April.
Three years in and her sea trials continue. Her itinerary for 2018 is Malaysia, Indonesia, Australia and New Zealand. From there she will cross the South Pacific to Chile, then cruise up the Pacific coast to Vancouver, southwest to Hawaii, on to the Marshall Islands and Japan before finally reaching her home port of Hong Kong.
‘Several ocean passages and hard-fought regattas have proved the stiffness and reliability of the construction,’ says Pedol. ‘The yacht is still in mint condition and the owner is completely satisfied.’
The boat behaved beautifully on the trip to Cape Town. With the exception of 30 hours under power, the crew were able to sail all the way – a total of 21,000 miles. During the trip they faced all sorts of weather conditions, including some very tough ones, and the boat was very well balanced and easy to handle, with the crew always feeling extremely safe.
Read on.

sailing with a broken wing