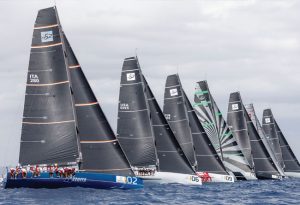 Big Pimpin’
Nine new TP52s launched in 2018 with nine new Southern Spars rigs, but each of them carefully tailored to individual crew requirements…
With nine new yachts on the startline for the 2018 TP52 Super Series, it’s a testament to the health of the class and the commitment of owners and teams who continue competing at the highest level. Adding to the excitement is the fact that teams gearing up for the 2021 America’s Cup will be using the TP52 circuit to hone their skills in preparation for the new class of Cup monohulls.
Sir Ben Ainslie’s British syndicate has partnered with Tony Langley’s British Gladiator Sailing team, while Challenger of Record Luna Rossa have a new build for the series. Quantum Racing, with their connections to the New York Yacht Club challenge, are also a leading contender in the fleet.
First of the new boats launched was Sled, built in New Zealand for Japanese owner Takashi Okura. Sled has a number of Kiwi sailors onboard, including senior Emirates Team New Zealand member Ray Davies as tactician. Commenting on the evolution of the class, Davies notes: ‘Most teams have made changes to the positions of the appendages and the masts have been changed, the evolution being the stiffness of the mast and the position of the deflectors. Most of the new boats seem to be heading in the same direction. Everything is stiffer and more locked in.’
The single common factor across all nine new boats in this super-competitive environment is the selection of Southern Spars and associated Future Fibres as the rigs of choice. Southern Spars have been closely involved in the circuit from the outset and this across-the-board confidence in the brand reflects the results achieved on the racetrack. Read on.