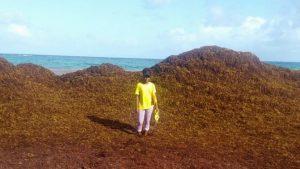 The Environment
When waves of sargassum – a type of seaweed – washed up on Eastern Caribbean shores seven years ago, people hoped it was a one-off. Matted piles swamped coastlines from Tobago to Anguilla.
“In 2011 it was the first time we’d seen it,” says Professor Hazel Oxenford, an expert in fisheries biology and management at the University of the West Indies.”It came as a complete shock and no-one had a clue what to do with it.”
Three years later the seaweed returned, in larger quantities. Over several months, it made its way through the Caribbean to southern Mexico, where its impact on Cancun’s beaches made international headlines.
Now it is happening again and everything suggests 2018 could be the worst year yet. “On satellite images the quantity that’s being picked up is greater than ever before,” says Prof Oxenford, who is based in Barbados.
“Certainly we’ve had it for longer and in huge amounts. And some of the islands are getting it for the first time.” Caribbean governments are acknowledging that the seaweed, which impacts on tourism, fisheries and wildlife, could pose a long-term threat. Read on, courtesy of the BBC.

Sailor Chicks of the Week – Exposed!