but we want the purple boots! 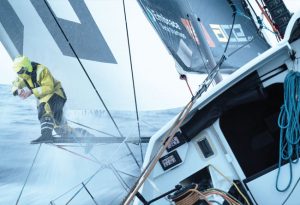 Big Pimpin’
What we’ve found over the years has been that it’s easier for a footwear manufacturer to diversify to become a clothing manufacturer than for a clothing manufacturer to start making footwear!’ So says Dubarry’s marketing director Michael Walsh, who has worked at the Irish technical footwear specialist for more than 20 years, and claims that designing, engineering and making a reliable and comfortable sea boot is much harder than it appears.
Dubarry started out making boots for the marine market and have since branched out into the much bigger and more lucrative markets such as equestrian and country lifestyle. Rugby is also an important target market, not on the rugby pitch but on the sidelines which in Dubarry’s native Ireland can be a cold and damp place to stand for two hours. Warm, comfortable boots are a prerequisite for enjoying a Six Nations match in the depths of an Irish winter or when watching the kids from the sidelines at Saturday practice.
Whatever other markets Dubarry may have unlocked, sailing is where the brand began and it remains central to the company’s DNA. For more than 30 years it has been the boot of choice for the world’s best offshore sailors. Walsh can recall when Lawrie Smith asked if Dubarry could make a boot that would match the purple of Silk Cut, the cigarette packet that propelled Smith around the planet in the 1997-98 edition of the Whitbread Round the World Race. It’s perhaps the first and only time Dubarry will ever make a purple sea boot.
Read on.