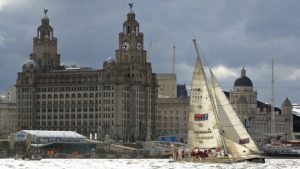 Australian Wendy Tuck has become the first female skipper to win the Clipper round-the-world yacht race. Thousands watched her team return to Liverpool, nearly a year after 12 yachts set out from the city.
The 53-year-old told the Australian Daily Telegraph: “I hate banging on about women. I just do what I do but I am very proud.” British skipper Nikki Henderson, 25, came second with her team in the 40,000-mile race.
Race co-founder Sir Robin Knox-Johnston, who was the first person to sail solo nonstop around the world, said: “If you realise that more people have climbed Mount Everest than have sailed around the world, you realise just what these people have done.
“There has never been a round-the-world sailing race where the leading skippers are women,” he added. “To have men and women competing together in sport on a level playing field is very special.
He said the success of Tuck and Henderson “cannot be overestimated”. More here.

if we tell you, we'll have to kill you