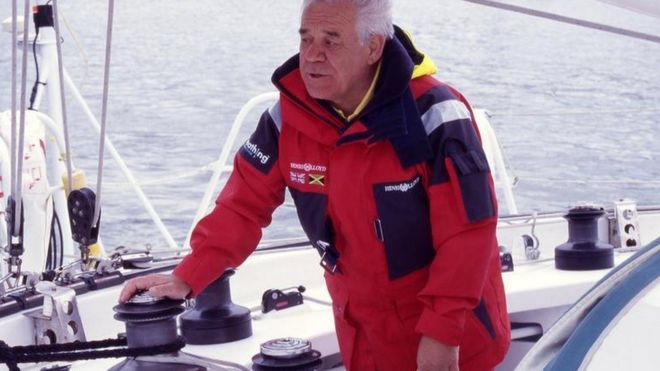 Some people become legends for the right reasons and some become legends for the wrong reasons. British sailor Tony Bullimore was a household name in England for both right and wrong reasons. Mostly it was because he survived for almost five days in the upturned hull of his Open 60 sailboat deep in the Southern Ocean. More on that in a bit but before Tony became famous for his uncanny survival skills, he was already a well-known sailor setting and breaking records in his Nigel Irens designed trimaran named Apricot. The boats revolutionized offshore racing in the 80s and helped push the boundaries of multihull design. Among his victories was winning the Round Europe race and the Round Britain race, both of them in 1985. He also famously capsizing his successor trimaran Spirit of Apricot in the Bristol Channel.
I first met him in a pub in his hometown of Bristol, England. Tony was looking for new sails for his 102-foot catamaran which he was planning to race non-stop around the world in an event called the Oryx Quest. We shared a few beers and a blistering hot curry and after bantering back and forth about our various sailing exploits we shook on a deal to make an entire new suit of sails for the boat. I asked Tony later why he had chosen to go with me for the sails when I was well aware that all the other top sailmakers wanted his business. He told me, “anyone who can withstand a curry that hot is someone I can trust.”
Before Bullimore became a world class yachtsman he and his West Indian wife  Lalel opened an Afro-Caribbean inspired night club called the Bamboo Club and they attracted some great artists including Bob Marley, Jimmy Cliff and Tina Turner. The place was closed 11 years later after the club burned down. The Sex Pistols were due to play there that week.
Tony was always around the European sailing scene and his biggest goal was to do the Vendée Globe and in 1996 he got his wish and left Les Sables-d’Olonne in France to head off around the world aboard his boat Exide Challenger.  On the 5th of January, 1997 he capsized and was trapped inside the upturned hull. Although he had activated his EPIRB he told me later that he had very little hope of being rescued. He told himself that this was it as he watched the water inside the yacht get closer and closer to the perch he had made for himself in the only air pocket. For just under five long days in the pitch dark and cold he survived on scraps of food that floated by and a bar of chocolate which he had found.
What he didn’t know was that the Vendée authorities had alerted the Australian navy and a ship had been diverted to his estimated location, as well as to the location of fellow  Vendée Globe competitor Thierry Dubois. They found Dubois in the nick of time as his boat was sinking under him and they found Bullimore hours before he would have run out of air. The ship launched a RIB and they knocked on the hull. Tony told me that he was sure that he was hearing things but then he heard voices and knew that he was being rescued.
I saw Tony a number of times in recent years and he was always affable and full of life. Each time I saw him he would tell me that he was promising his (long-suffering) wife Lalel that he would very soon buy a place in Jamaica and retire, but I don’t think he ever did. Tony died earlier today in England of a rare form of cancer. He was 79.