the ghost in the machine 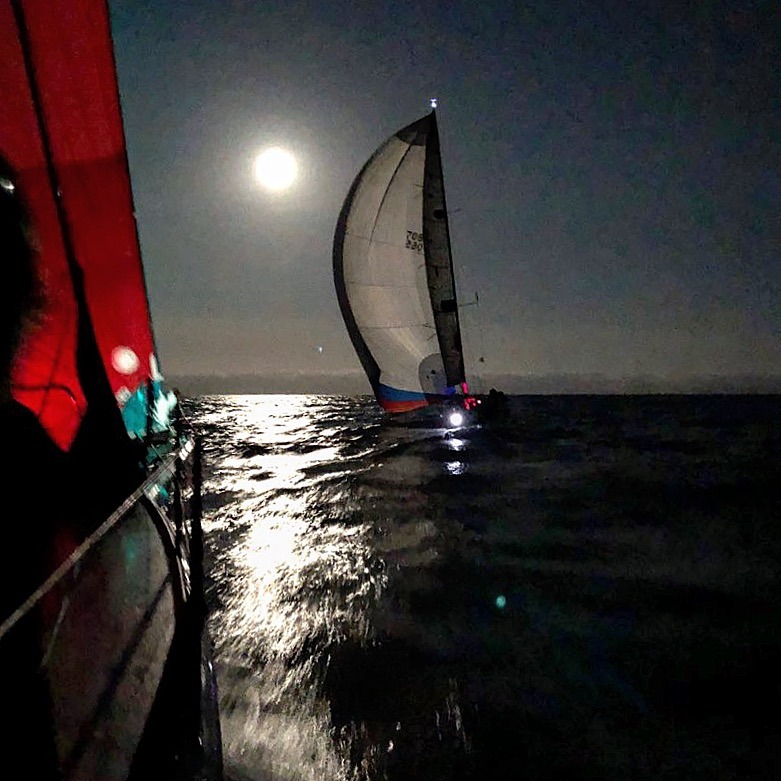 Two weeks of build up in the forums talking about how light the wind will be in this years’s Santa Barbara to King Harbor race. GRIB Files that showed an outside route with a southerly, and me laughing because I do not believe in GRIB files around the Channel Islands.  What a great way to get geared up for this one….
It all ended with a Groundhog Day Scenario for our J-125 Timeshaver as we finished 2nd overall in another race!  I think I write more reports than anyone about being second overall.  The only person with more seconds than me is Jeff Lenhart, 9 time runner up at Snipe Nationals (He did win two and a Worlds).
Let’s get right into it.  The consensus was that this year was going to be the lightest on record.  That might be true if you were one of the boats that followed the “routing” to a tee.  That is risky scenario given the unpredictable nature of the Channel Islands.
We found ourselves in ULDB C with the SC-50’s, the J-125 Warrior, Fast Exit and Farr 36 thingy.  Pretty cool class as we were all in the same rating realm.
The start was interesting to say the least.  We were going to win the Starboard end of the line until a boat decided to do a dip start on Port gybe.  Well that did not go very well for them, and without going into too many details (this is one of those ask me at the dock scenarios) they were over early and sat on top of us which allowed the boats we were going to pin out and escape route which put them directly above us.  So our perfect start ended up with us sitting in bad air. Cost us a bit, but whatever it is sailboat racing. We threw up the Code0 and went searching for speed and clear air. Pretty soon the other 125 followed suit and we were all off towards Anacapa.
We switched to the 1A and everyone followed our lead on that one too.  The other 125 had a 1.5A and could not keep the same line, so we promptly passed them and made it to the island the same time as the SC-50 and some Farr canting keel thing from the class above us. With both boats being above us we had to gybe away. Ouch. The gybe ended up hurting us and making it tough to get into the new breeze.  To add insult to injury we had to back down. I could see a massive piece of kelp trailing out the back of the boat and the cutters were not getting it. Probably a 10 minute delay…
No worries though we know we have good boat speed and can sail fast, which is exactly what we did.  The other 125 passed us during our island time and now we had to reel them back in. I would estimate they had a ½ mile to ¾ mile lead on us at this point.  Again we switched sails first and were into our 2A and steadily gaining on them. We stayed high and close to the island where more breeze started to fill. At this point you could tell the westerly was in effect and we sent it to the shore.  By the time we got close to the shore I was driving and it was blowing 20. We were in our element with a 2A and spinnaker staysail and going fast. We were mowing towards the other 125 & soon were in a position to roll them. Not sure why they didn’t use a staysail but we added about ¾ kt of boat speed with ours!
Eventually we rolled them and now it was a drag race to the finish.  1A up as the wind proceeded to get lighter. At about 6 miles out we converged with the SC-50.  I thought they would correct on us but they put up a genoa and we switched to the code 0. This was a key call and we started to move forward fast.
We rounded the channel buoy and finished under 1A around midnight.  Our main concern was correcting out on the SC-50 and we had the watches going.  Then out of nowhere the Andrews design  Fast Exit arrives with their spinnaker flowing and about 8 minutes of corrected time to spare.  WTF! They crossed the line and I immediately knew they had won overall and we would be second again! Great job to Fast Exit, that was the best I have seen the boat sailed.
Second overall is not so bad I guess but it still leaves that lingering feeling of what if.  On the positive note, we sailed the boat really well and are happy with our speed and sails compared to the other 125’s we race against.

Thanks again to  owner Viggo Torbensen for bringing it all together, and out rock star crew of Damian, Cody, Geoff, Bobbi and Blake!  Here is the video link… not super exciting but I tried.
– Keith Magnussen.