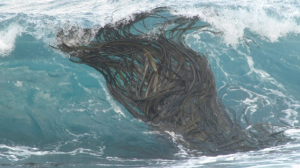 An unexpected find of southern bull kelp on an Antarctic beach has revealed the longest known biological rafting event ever recorded. DNA samples taken from the kelp revealed that one specimen drifted from the Kerguelen Islands in the Southern Indian Ocean and another from South Georgia in the South Atlantic Ocean. The kelp drifted an estimated 20,000 kilometers (12,400 miles), passing through what were thought to be impenetrable currents and winds.
New ocean modeling developed by Australian researchers trying to understand how the journey occurred has highlighted that this may not be a rare event and that kelp and floating pollution is likely to be reaching Antarctic shores more regularly than previously thought.
Strong westerly winds and surface currents are expected to drive floating objects north and away from Antarctica. But when the disruptive influence of Antarctic storms is factored in, that changes. The research team incorporated wave-driven surface motion, which is especially pronounced during storms, into their modeling which then indicated the possibility of debris arriving on the Antarctic coastline. Read on.
PS – Don’t tell President Traitor, he’ll declare war on kelp and Antarctica…