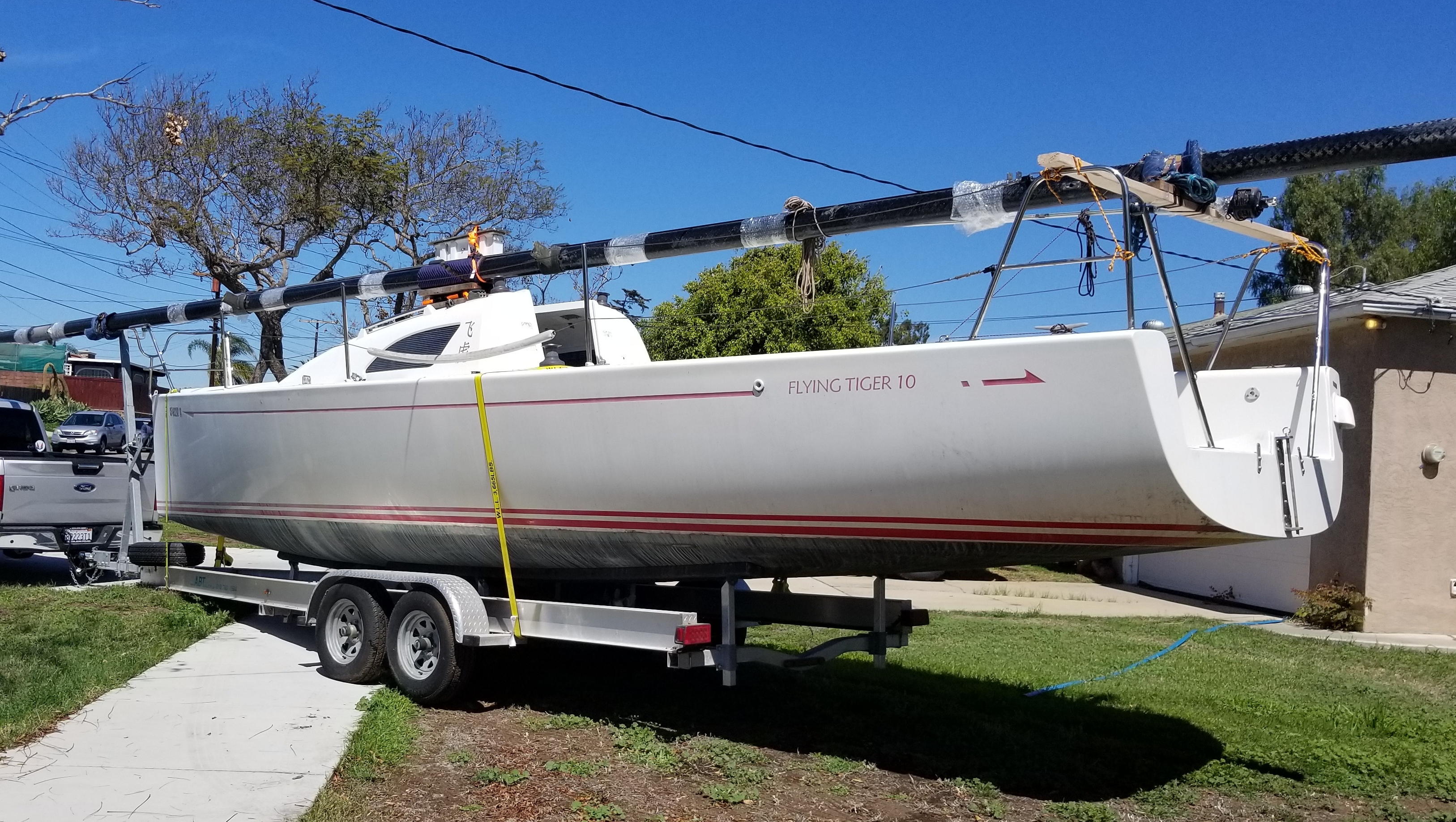 By OJ Tempesta
Now, I’m not saying I bought a Flying Tiger 10m, but if I did, here’s how I’d do it. First, I sure as hell wouldn’t pay what the mostly delusional owners of these 10-year-old beaters think they are worth. Y’all staight trippin’.
No, I’d find the right boat and low-ball the hell out of it to an owner in a hurry to get out of it. And that I did.
Said boat was over a decade old, but only had a season of racing on it before he pulled it out of the water and left it sitting in his back yard for all the rest of that time. Other than needing new everything (not quite but damn near), the boat had had virtually no use. There is no doubt that of the early boats (and almost all of them are out here) it is the driest, stiffest one out there. Pictured above is us towing the shitter out of the ‘hood…
If you are not a fan of black widow spiders, or rodent nests, you may skip this part. What this boat, hull #13, had been doing in said back yard for all those years was to be a refuge at least 50 black widow spiders (and their eggs) and at least 5 rodent “dens”. Piles of stored and rotted nuts, fruit and christ knows what else, the cleaning process of this thing was monumental. Anyone who knows Tigers will appreciate trying to get all of that shit out of the battery/fuel tank compartment…
Again, not admitting anything about buying at FT, I put together a game plan for the steps I felt were mandatory. Chuck Driscoll has been a decades-old friend, so I bargained my way into 6 week stay at Driscoll’s Mission Bay, in order to get the bottom in shape, and various other boat-type things.  Evodio at Marine Tech, located at the Driscoll facility and was my guy to paint.  After the arduous task of striping off the old, hard, hideous black paint, we were stunned to see how fair the bottom was! When we bought Anarchy 1, my first FT from a decade ago, the bottom was so unfair, I told the builder I was giving it back…They fixed it.
So we got the bottom smooth on the new FT (working name, China White), sprayed the bottom with five coats of Pettit Vivid white that came out beautifully, fixed the piece of shit engine trap door, got the kelp cutter squared away, and did some graphics work to give the boat the look I wanted.
We ALSO needed a new rudder as this boat was saddled with the pathetic stock rudder, tiller and cassette. There is only one man who builds the primo FT 10 class-approved rudder, and that is Jim Betts. Again, after hammering out a deal, 5 weeks later arrived a rudder so perfect I just stared at it. If there is a better dude and builder than Jim, I’ve not met him
Because I am a lazy sod, and couldn’t splice if my life depended on it, I approached David Servais at SD Boatworks  about a total rigging package: get the mast in fighting shape, replace all halyards and sheet with the latest from Marlow, replace and improve what we could within the class rules. David and Ryan have done such a fabulous job getting this boat simple, light and current. Personally, I could not recommend them higher. And for the record, I don’t get free anything. Cash (way too much), some trade and a little barter.
There are all kinds of stories like finding a new outboard that would fit in the tiny engine well, or figuring out instruments, but what I really want to share with y’all is who and why I chose for a sailmaker…
Title thanks to America’s hero. Part two coming.

it’s in the bag