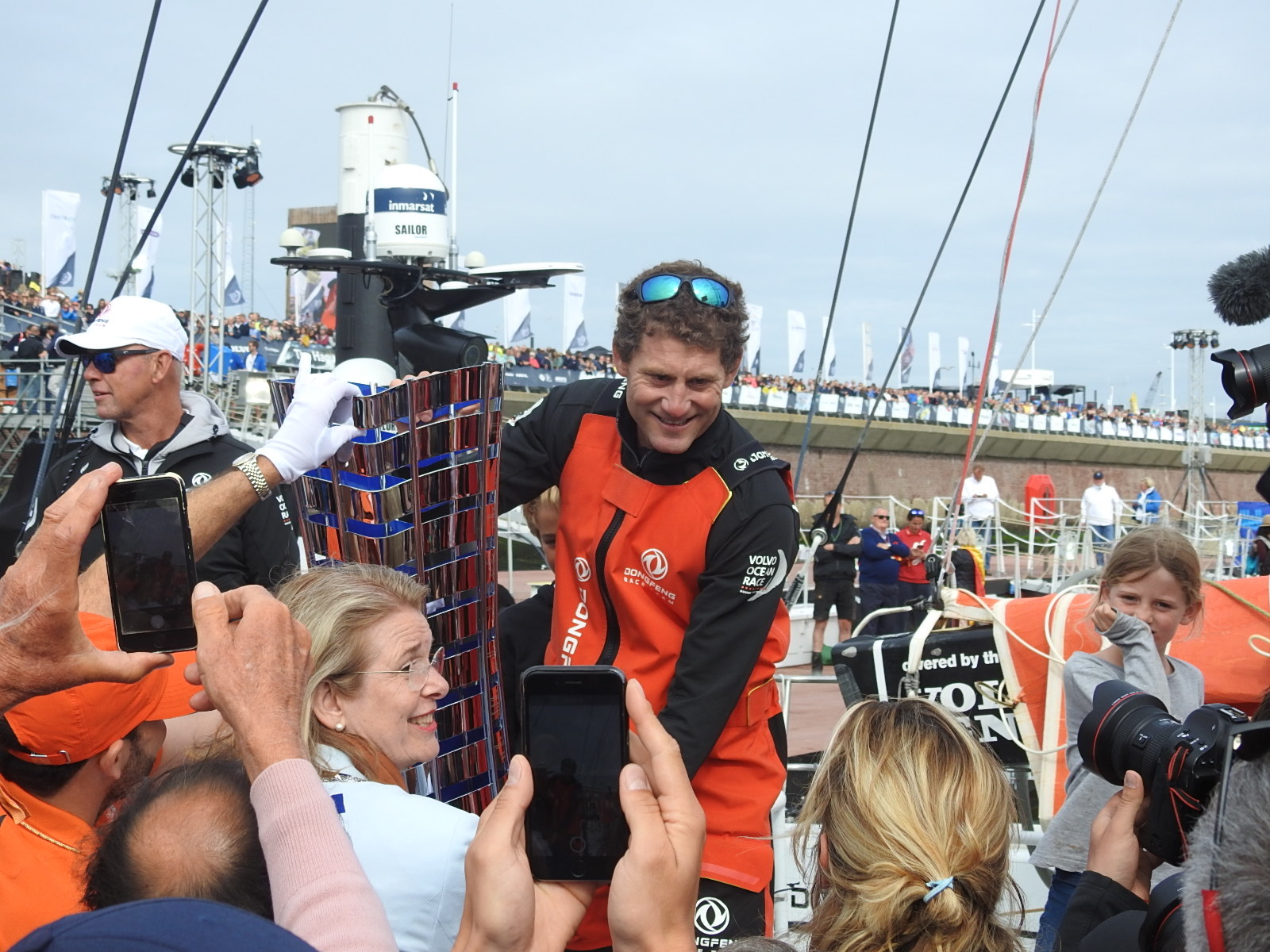 Until recently the name of Charles Caudrelier was virtually unknown outside France or beyond the keenest of (short handed) sailing fans.
Even many keen followers of the Volvo Ocean Race only know his career since he joined Dongfeng Race Team 2 races ago clearly proving that people so often only remember the skipper because of course he was Franck Cammas’ right hand man in Groupama’s victory in the previous race.
Of course before that he had a Figaro victory and claimed the Transat Jacques Vabre on two occasions. This quiet and quite shy Parisian started his rise to prominence when appointed skipper of Dongfeng Race Team 5 years ago, a team seen by many as just there to make up numbers and include Chin ain the overall line up.
Charles was heavily involved from the beginning, after all these were going to be his crew members. Some of the western picks were quite easy. Pascal Bidegorry, one of the best navigators on the planet, Martin Stomberg, strong and steady in the middle of the boat and Kevin Escoffier as bowman who was to prove invaluable as a “Mr Fix-It” as the race progressed.
The Chinese sailors were a bit more on an unknown quantity though with a Morning Light style boot camp held in Sanya in Southern China to put the sailors through the mill measuring their raw fitness, their stamina and their determination to succeed.
Off they set, expected by many in the yachting media and wider world to prop up the fleet so imagine the surprise when leaving Auckland they were at the head of the leaderboard but that was all to change before returning to the Atlantic Ocean. A mast break 250 miles from Cape Horn ended any realistic chance of victory but Caudrelier held his team together to finish on the overall podium.
Dongfeng 2.0 was going to be an entirely different animal.
In between though was a same but different project. Wang Bin CEO of Chinese company UBOX wanted his team to do the Rolex Sydney Hobart Race. Charles and the Dongfeng team saw this as another opportunity to work with Chinese sailors. The crew was better than 60% Chinese and also included Marie Riou on try out for the next Volvo as rules had changed to allow 2 women. It also has to be said that Charles was in the first tranche of skippers seeing the advantage of an extra pair of hands and extra mind.
UBOX, a Cookson 50 became the first Chinese boat to sit on the podium of this iconic race also taking to[ spot in ORCi as a bonus.
Marie was later to be joined by Carolijn Brouwer, recruited by Charles because “she beats me in the in-port races – where does this man hide his ego?
He can be seen, especially in moments that, without an OBR on board, would be private, be seen to let his frustrations bubble over yet at other times he keeps these to himself. Most notably when after hours of practice and testing Dongfeng discovered that to NOT fully cant the keel meant the boat had more righting moment due to the inclining of the keel root. More righting moment of course means more power and more speed, estimated by DFRT at 1-1.25 knots in some conditions.  After all that work one of the Volvo race “experts” let it out and the whole world (including of course the other teams) knew. To say he and his crew were not happy is more than a slight understatement.
But true to the nature of the man and the tightness he had established in his crew it just led to a greater determination. Newport was another situation where a lesser team would perhaps have crumbled yet this just added to DFRT’s resolve.
By the time Charles led his team into Gothenburg, as we all know this had become a three horse race.
Difficult choices lay ahead but as Charles, Pascal Bidegorry and Onshore router Marcel Van Trieste got together they received a message from sponsors Dongfeng Auto. Basically telling the team they were more than happy for what the team had done for them and just sail the last leg for themselves.
So when DFRT made the dramatic (and pretty much pre-arranged) shift towards the Danish coast and Mapfre had their will we/ wont we moment the die was cast. At times the combination of higher wind speed and better direction – a reach compared to the offshore boats downwind showed a boat speed difference of more than 6 knots and for a short while a VMG difference of over 10 knots.
That said when we docked out in a RIB with the boats a little over an 1 hour away Dongfeng were lying 4th according to the (line of sight) tracker yet when we intercepted them just a couple of miles down the race course they were 2 miles in front of Akzonobel. As they crossed the finish line VOR commentator Niall Myant- Best said “Victory in the Volvo Ocean Race goes to China, it goes to skipper Charles Caudrelier and his team, it goes to Dongfeng Race Team.
Charles had led a team of sailors from disparate nations, FRA; NZL; NED; AUS/GBR and of course CHN, some as offshore sailing rookies 5 years ago, or in Marie Riou’s case just 2 years ago to a close but emphatic victory. Their consistency  first Chinese winners, the first female winners and a near perfect record for the skipper with 3 podiums from 3 races, 2 as skipper, and 2 victories one with Franck Cammas and one on his own account. I am sure there will many entrants next time round who would not want to see the name of Charles Caudrelier on the roster of any team entered.