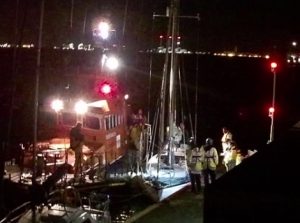 The volunteer crew of a Sheerness Royal National Lifeboat Institution (RNLI) lifeboat launched Friday night after the UK Coastguard reported that a yacht had run aground and was taking on water. 24 hours later, the same lifeboat had to return to the same yacht after its owner refloated her and got caught by the current.
The first call came at 2315 hours Friday, and the crew responded to the yacht’s position on the Isle of Grain, just across from the lifeboat station and just south of the entrance to the River Thames. The lifeboat quickly located the 30-foot craft, which was lying on its port side and mostly submerged, with one male crew member out of the water and clinging to the stern guard rail. The crew assisted the man aboard the lifeboat, and other than being cold and slightly shocked, he was not suffering any injuries.
The yacht had run aground on a falling tide, and with insufficient water for support, it had canted over onto its side. When the tide turned, the vessel was stuck fast on the rough ground and flooded as the water rose. The man on board was left in a dangerous situation with only a small area of the yacht left above water.
Read on.