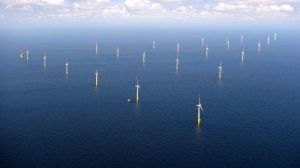 Following its recent entry into Taiwan, German energy company EnBW has now expanded its activities to the U.S. with the formation of a joint venture with Trident Winds to develop an offshore wind project off the coast of central California.
EnBW North America and Trident Winds, based in Seattle, have formed a joint venture to advance the 650–1,000 megawatt Morro Bay offshore wind project off the central coast of California.
EnBW sees floating technology as a key technology as it opens new areas with greater water depth and better wind conditions. The company cites the high potential of the American market, as several states have set ambitious goals for the expansion of offshore wind. EnBW is targeting California first due to its strong economy, continuously growing energy demand and ambitious renewable energy and climate goals.
“Offshore wind development on the West Coast of the U.S. is still at an early stage,” said Dirk Güsewell, Head of Generation Portfolio Development at EnBW. “The state of California, which is aligned with our home market of Baden-Württemberg through a 2015 joint commitment to climate protection, renewable energy and sustainable mobility, has some of the most ambitious climate and renewable energy goals in the country. Hence, offshore wind is positioned to play an important role in California over the next decade.” Read on.