swim at your own risk 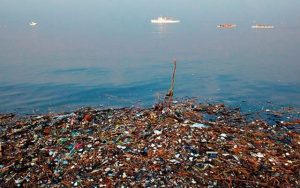 Having once vowed never to attempt such madness again, Ben Lecomte is set to take on giant waves, sharks and a pile of floating garbage the size of Texas in a perilous quest to swim across the Pacific Ocean. Faced with an epic 9,000-kilometre (5,500-mile) adventure, his bid to become the first swimmer to accomplish the daunting feat begins in Japan and is expected to take more than six months, finishing in San Francisco.
Part adventure, part scientific research, Lecomte and his eight-person support team will conduct a host of marine experiments as they seek to raise awareness of ocean pollution and plastic contamination. Two days after turning 51, Lecomte will enter the waters off Japan’s east coast Tuesday, after which the swimmer will be at the mercy of the elements.
Read on.

if we tell you, we'll have to kill you

too big to eat