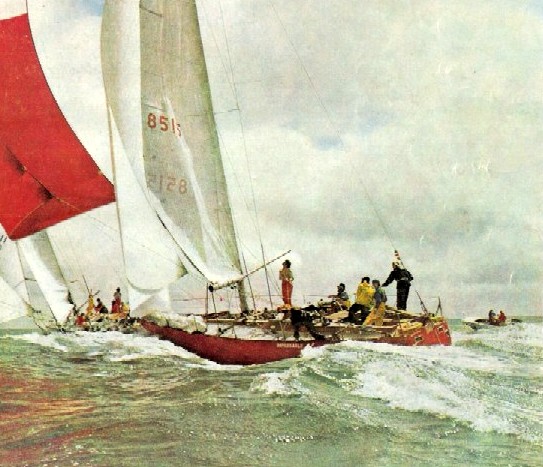 Damn, there have been  too many sailors who have passed that really made a difference, so tonight we present you with two. Then tomorrow, we get back to the fun….
Leonard, “Len” Schwab died peacefully in his sleep Saturday, April 14, 2018 at the Whatcom Hospice Center in Bellingham, WA.
After military service, Len moved to the West Coast and never looked back. His life-long curiosity in aviation, ocean-water adventure, astronomy and cosmology strongly motivated him to build his lifestyle and career around these interests. He became employed at Boeing Aircraft as a Milling Machine Programmer and through multiple promotions/schooling became a Lead Engineer. His first significant project was working on the machining programming for the wings for the first Boeing 747.  This was the beginning of the field of “NC machining”.
Due to his highly sought -after skills as an aerospace industry machining programmer, Len became an independent contractor which allowed him control over his work schedule.  He used this new found freedom to take off work for long blocks of time to do what he was most passionate about, ocean sailing.
The adventures he experienced during this period of his life foreshadowed the atypical lifestyle he led for the rest of his life. From 1973 to 1976, a three-year voyage ensued with enough adventures to fill a novel.  Len set out from California with his three young children, Bruce, Steve, and Chris, ages 13, 12, and 9, respectively, in a Volkswagen van and trailer joined by Len’s girlfriend and a small dog. They traveled across the country with the goal of finding a new boat on the East coast. After stops in Illinois, Maine, and a tour of New England, the Winthrop Warner designed and Paul Luke- built “Astral” was found on the Chesapeake Bay. Len renamed the boat “Sara B.” after his much-admired Grandmother, and the motley crew “bounced” their way down the Intracoastal Waterway to Florida. They cruised through the Bahamas and Jamaica spending months at a time working on the boat. After a 4-month repair session in Jamaica, the “Sara B” was finally fully seaworthy and they successfully passed through the Panama Canal and northwards back to the U.S.
This three year sailing experience not only impacted Len’s life, but it had significant influence on 13 year old Bruce, Len’s oldest child who developed into a well-known world class American sailor and ocean racer. Among many lifelong sailing accomplishments in Bruce’s early adult years, he singlehandedly circumnavigated the globe twice. Len took extreme pride in Bruce’s sailing fame, inwardly knowing he was Bruce’s original and most meaningful mentor.
Len sold the “Sara B” and made a major move in his life by purchasing  a 42 foot famous ocean-racing sloop named “Improbable”, a boat designed by Gary Mull in 1970, winner in the 1971 Montego Bay Race , and named in the “100 Greatest Sailing Yachts in North America” by Sailing Magazine.   He lived on the boat while racing in the San Francisco Bay for years, and after moving back to Seattle, utilized his skills to optimize Improbable for singlehanded sailing. After full retirement, Len would singlehandedly cruise the San Juan and Vancouver Islands for years. His home base became Birch Bay (Blaine), WA where he finally purchased a house not far from the boat’s berth in the Birch Bay Marina which provided a short sail to the San Juans.  Len often sailed Improbable singlehanded, right up to his 80th year.
Len is survived by his son, Bruce Schwab, and a grandson, Alex Schwab, both of Woolwich, ME; his brothers, Bob Schwab of Rock Falls, IL, and Tom Schwab of Sterling, IL., and sister, Sue Alt of Door County, WI. Len is also survived by his former wife and life-long companion and primary caregiver, Dora Zepeda and also by his first wife, Anitia Jimenez. Len is preceded in death by his parents and two of his sons, Steve and Chris Schwab.
He will be missed.