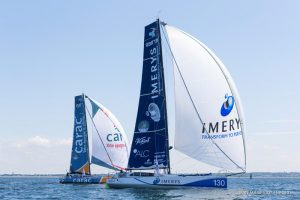 No surprise, really. Phil Sharp is that good….Photo Jean-Marie Liot.
Ultimately, victory in this incredible six-day edition of the 2018 Normandy Channel Race came down to just six seconds. Indeed, this was all that was separating the top two on the finish line set off Ouistreham yesterday afternoon, Imerys Clean Energy skippered by the duo Phil Sharp-Julien Pulvé just snatching the win from Carac skippered by Louis Duc and Gwen Riou despite a valiant effort from all involved in what has been an intense battle from beginning to end.
Lasting a little over 6 days and 50 minutes, the Normandy Channel Race gave rise to a merciless elimination race, which saw the original 27 competitors gradually falling out of contention from one course mark to the next. Indeed, the leading group went from 14 in the Solent, to 11 at Wolf Rock, then around 6 at Tuskar and Fastnet and eventually just 3 for final victory, in a race punctuated by a series of dramatic turns of event. The three-way final that started at the Channel Islands went right to the wire, each of the duos taking a turn in the hot seat on the last morning of the race. Phil Sharp and Julien Pulvé took the win after a superb effort colored by sheer stubborn determination. In so doing, the Briton joins the Spaniard Pablo Santurde on the list of double consecutive champions of the event.
Read on.