20 Years of Inspiration, a Full Circle
One of my best friends is Bob Boyes, one of the close mates I grew up with learning how to race and spending plenty of years doing just that.  And still to this day, Bob is one of the best downwind helmsmen, ever. He still sails his old skool 36′ cat, so I asked him to to tell the story about how he got it going, all these years later… – ed.
In 1997 While sailing the Transpac on Victoria (NM68) I had an epiphany. A Multihull that was a distant rig barely visible on the horizon behind us went past us and disappeared over the horizon in front of us in about 4 hours. I asked myself (beside being paid well) what am I doing on this 12ktsb?
Enter the DARK SIDE! I went back to California with a new determination, a new purpose. I went to a mate of mine and talked him into being my partner in some kind of multihull. We looked around a bit and it didn’t take long to find a true diamond in the rough. It had history and wasn’t a cruising boat. It was an outlier, a true DARK SIDE icon. The designer, the build and the rumors were all soaked in the outside of the outside world of multihulls. The Boat a Rolland 36 or as some know it as a NACRA 36. As far as I am aware it was the first (In Vic Stern’s words ORCA RIP) over-sized beach cat. The boat pictured here Is when we bought it for $13,500.
It seemed like a bargain and in the sense of inspiration it has been all that and more. I don’t look at the money, although the wife does, or the amount of hours we have rubbed the sandpaper along these sleek hulls, the removing of hardware and remounting, the design work on napkins or the hours of work in general compared to the actual sailing hours. No. I look at the inspiration it has provided to my mates and I to get the boat on the water and to enjoy the fruits of time doing what we love to do. To put a package together that screams fuck you establishment!
The Rolland 36 was designed in 1978 and 10 boats were built out of the same rough mold. Ours is the second one built (1979) out of ten made, hence the name. Out of the 10 boats this is the last one still sailing. The others either went down the mine shaft and sank or just blew up. In the seventies this design was originally a talking point at the smaller boat multihull regattas in So Cal, to think outside the box of conventional compromise larger multihulls and set a bar that until recent years has had few if any rivals. 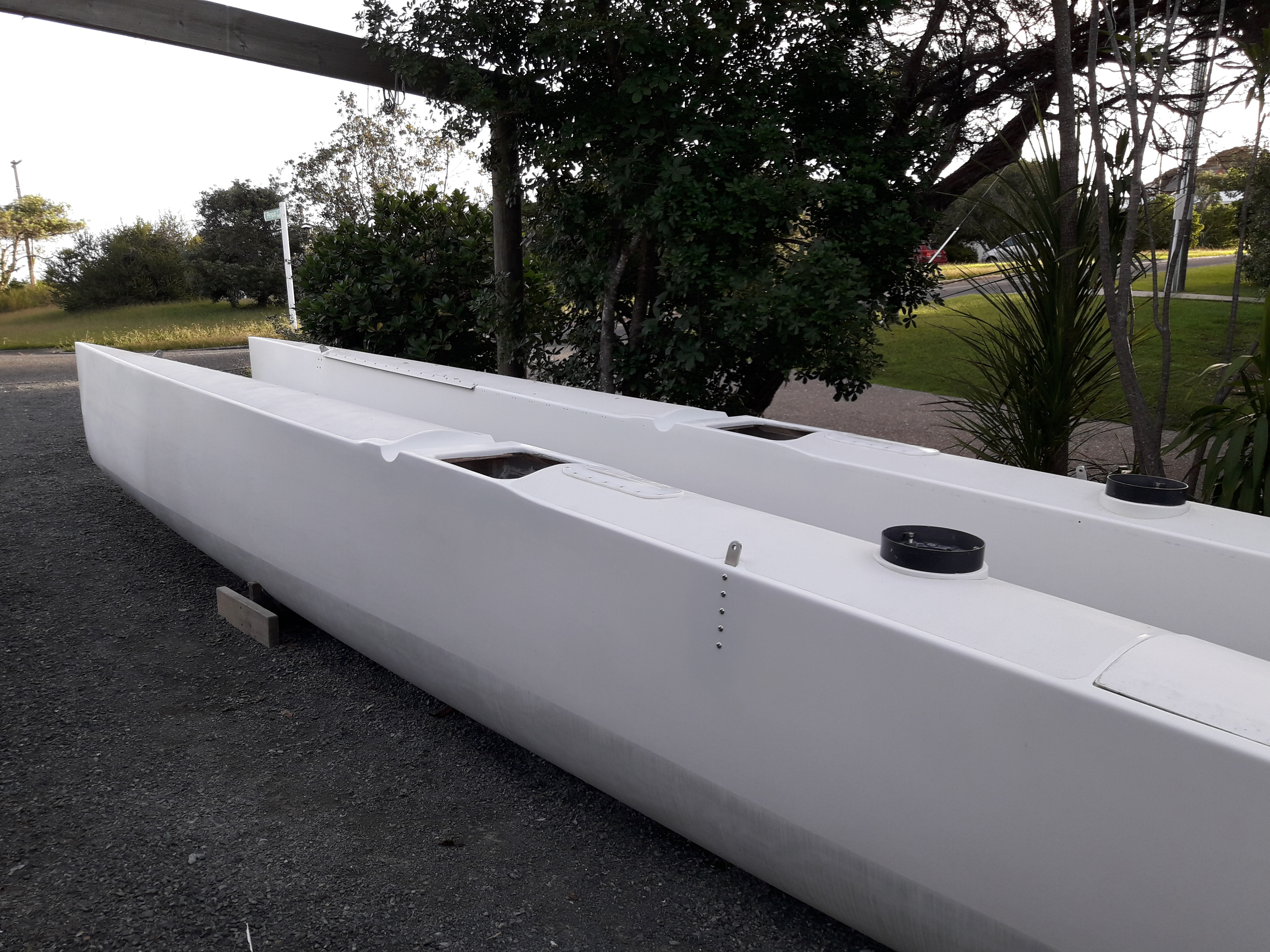 I have been said to have a fetish for a little punishment and so it was with taking this sleek sexy cat and modifying it to meet the absurd requirement of a headroom rule for short coastal racing that we got stuck in and (gasp) put cabin tops on it. Always ugly and impractical it satisfied the rule but never offered what the purveyors intended, a safe dry spot so if you got sick or injured you had a place to retreat to get helped by others. No racing catamaran of this size can claim this.
I don’t care how much headroom you have. I have been a professional yacht racer, licensed boat captain for forty years and a first responder, paramedic & fire fighter for 11 years I have never seen where headroom has anything to do with being safe on a boat. So naturally the cabins have been cut back off and the original design restored.
It has been 20 years now of blasting around the waters of California, New York and now New Zealand and for that we are grateful. This year will be the third incarnation of the boat and I am looking forward to getting back on the water and raising a few stuffy shirted eyebrows or at the very least having a hell of a time with others that enjoy the passion of a good day on the water.
– Bob Boyes.